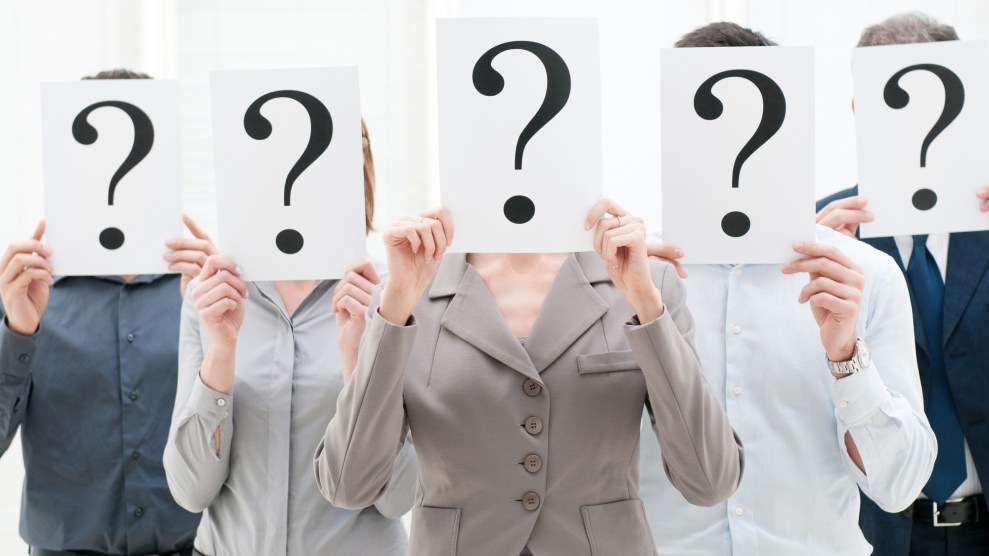 Update (6/30/2016): A new analysis of state and federal data suggests the number of transgender American adults is twice as big as previously estimated. According to reports released today by the Williams Institute at UCLA, an estimated 1.4 million adults, or 0.6 percent of the total population, do not identify with the gender they were assigned at birth.

Transgender rights have cropped up in the news a lot over the past year, from Caitlyn Jenner’s publicized transition to the fight over sex-segregated bathrooms. Trans rights have even become a campaign issue, with everyone from former presidential hopeful Ted Cruz to presumptive Democratic nominee Hillary Clinton speaking out on recent anti-transgender legislation.

But despite this national conversation, “we can’t really say how many transgender people are in the US, and we can’t really say what their demographics look like,” says Jody Herman, a public-policy researcher at the Williams Institute at UCLA, which has been a leader in efforts to study the transgender population. The federal government has done little to estimate the number of transgender citizens. In part, that’s because the Census Bureau’s American Community Survey, an annual population count, only asks about sex.

Our best guess: About 0.3 percent of American adults are transgender.

On Thursday, Orange Is the New Black star Laverne Cox, a transgender rights advocate, will speak on Capitol Hill about this lack of data, which can make it difficult for policymakers to address anti-trans discrimination. Cox is urging lawmakers to pass the LGBT Data Inclusion Act, which would require federal agencies like the Census Bureau to include questions about sexual orientation and gender identity in national demographic surveys. “That gap in data potentially denies policy initiatives and funding” to help transgender people, says Arizona Rep. Raúl M. Grijalva, who introduced the bill.

For now, here’s what we know—and what we don’t—about the size of the country’s transgender population.

Our best guess: About 0.3 percent of American adults are transgender. This estimate comes from a 2011 study by Herman’s team at the Williams Institute at UCLA, a think tank that analyzed data from a state-level health survey in Massachusetts and a survey about tobacco use among LGBT people in California. But it’s based on a relatively small group of respondents, cautions Herman.

Herman and her team are now working to crunch data from many more state-level surveys. Over the past two years, she says, 19 states have started asking about gender identity in state-level questionnaires about health risk behaviors run by the Centers for Disease Control and Prevention. “We think it could potentially be higher than 0.3 percent now,” she says. Teenagers are more likely than adults to identify as transgender, she adds. Between 0.5 percent and 1.5 percent of teenagers probably identify as such, estimates Dr. Emily Greytak of the Gay, Lesbian & Straight Education Network. That’s based on small, local surveys, since there haven’t been any national surveys of transgender kids, the New York Times reports.

“How do you distill someone’s identity or experience into a checkbox?”

It’s not easy to come up with more definitive numbers. “How do you distill someone’s identity or experience into a checkbox?” says Herman. Challenges abound. For starters, gender identity can be fluid, and it’s possible for someone to identify with more than one gender. Some people might not identify as transgender when asked on a survey—a trans man who was born with female genitalia might just check the box for male.

Researchers are experimenting with two-step questions that could get better results: First they ask for a person’s birth sex, and then for his or her current gender identity, to determine transgender status.

There’s also a problem of scale. To properly quantify a group that makes up such a small percentage of the overall American population, surveys need to be very large—which is difficult without government help.

It could be tricky to ask about gender identity in the Census Bureau’s American Community Survey, Herman says, because the survey relies on proxy reporting—one person in a household fills it out on behalf of everyone else who lives there. It’s unclear whether the bureau will collect data on trans people in its next census in 2020 because it does not have to submit its census questions to Congress until 2017.

What other studies are out there? Last year, a researcher at the Census Bureau looked at how many people have ever permanently changed their sex or their name (from traditionally male to female, or vice versa) with the Social Security Administration. He found that between 1936, when the administration was established, and 2010, as many as 135,367 people changed their name, and 30,006 also changed their sex—with dramatically more people making these changes in later decades. The researcher noted that people were more likely to request these sorts of changes if they lived in a state with nondiscrimination laws to protect LGBT people.

The Williams Institute at UCLA is also working on a project called TransPop, making use of a Gallup survey of 350,000 American adults to find transgender people. This is thought to be the first time researchers have used random selection to collect data about transgender people—crucial for getting a sample of participants who are representative of the population nationally, according to the study’s lead researcher, Ilan Meyer. He says the goal is to break down the transgender population by other factors—to see how many are black or white, for example, or how many have graduated college.

Surveys by advocacy groups have found transgender people online or through the community instead. These surveys, which tend to be based on smaller samples, are less helpful for amassing national demographic data, but they’ve been instrumental to our understanding of what it’s like to live as a transgender person. In 2011, the National Center for Transgender Equality released a landmark study about how transgender and gender-nonconforming people face discrimination in sectors like housing, education, employment, and health care. The survey included staggering findings, including that 41 percent of 6,450 respondents had attempted suicide, compared with 1.6 percent of the general population. The NCTE plans to release another, bigger study of transgender people later this summer.

20 percent of transgender respondents had served in the military—compared with about 10 percent of the general US population.

The 2011 survey also found a surprising trend: Twenty percent of respondents had served in the military—compared with about 10 percent of the general US population.

The feds are starting to do better. In 2015, the Obama administration convened an interagency group, led by the Office of Management and Budget and including the Census Bureau, to identify best practices in LGBT data collection. Building off that effort, last month Arizona Rep. Grijalva introduced the LGBT Data Inclusion Act. “We need a much more comprehensive approach than we have right now,” he tells Mother Jones. The CDC currently collects some gender identity data through its HIV surveillance, according to Herman, and the Bureau of Justice Statistics will begin asking about gender identity in its National Crime Victimization Survey in July.

The BJS already asks about gender identity in its National Inmate Survey, which has found that transgender inmates face disproportionately high rates of sexual assault in prisons and jails. In 2014, the FBI for the first time published statistics for hate crimes against transgender and other gender-nonconforming people. But none of this data shows how big the trans population is nationally, and how that population breaks down by age, race, and other factors.

Why do these numbers matter? Without national demographic statistics, policymakers may be fumbling in the dark when it comes to crafting legislation that helps trans people. And that’s troubling, considering all the high-stakes questions that have recently been thrust before them: Should transgender kids be allowed to use school bathrooms that correspond with their gender identity? Should the Department of Veterans Affairs pay for medical procedures like sex reassignment surgery for trans veterans? How can we keep trans inmates safe from sexual assault in prisons and jails?

“To go uncounted is to be unseen in the eyes of policymakers,” Rep. Raúl Grijalva said.

“The current lack of sound data about sexual orientation and gender identity in many federal surveys means we are ill-prepared to meet the needs of these communities,” Rep. Grijalva said in a statement. “To go uncounted is to be unseen in the eyes of policymakers, which is why we must develop a credible and confidential understanding of these vulnerable populations we currently know too little about.”