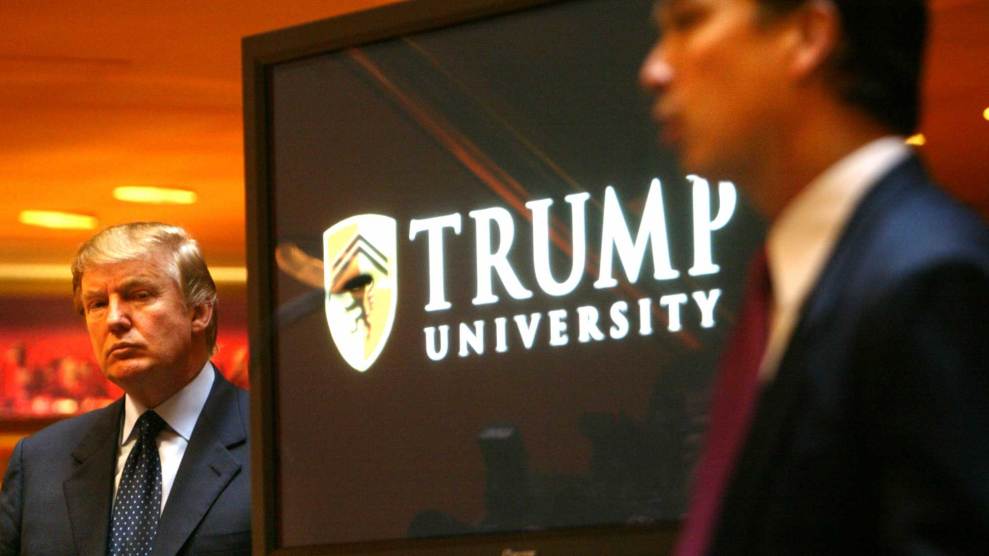 In the promotional video for his controversial and now-defunct Trump University, Donald Trump stared straight into the camera and proclaimed, “At Trump University, we teach success. That’s what it’s all about. Success.” He promised: “It’s going to happen to you.” And he went on: “The biggest step toward success is going to be sign up at Trump University.” With Trump U and Trump now accused of fraud in several lawsuits, records are emerging that suggest this Trump endeavor was not on the up-and-up and routinely employed hard-sell and shifty tactics to separate customers from their cash. But perhaps the big con behind this operation was that Trump, the presumptive GOP presidential nominee, may not have believed that he could teach whoever signed up how to be successful, because through the years, Trump has repeatedly declared that he believes not everyone has the genetic composition and intelligence to become wealthy and successful.

Trump, who has campaigned as a champion of the little guy, has often stated his belief that only certain humans have the potential to be achievers. In a video for a 2006 book he co-wrote, Why We Want You to Be Rich, Trump was asked, “Do you think anybody can be rich?” His answer was no, and, in explaining this, he dumped on the most famous line of the Declaration of Independence:

No, I don’t think anybody can get rich. I think unfortunately the world is not a fair place. I think you have to be born with a certain intelligence. And it doesn’t have to be a super intelligence, it has to be a certain intelligence. You can’t take somebody that’s not a smart person and say, “By the way, this is what you do, and here’s your little card, and you’re gonna follow these rules and regulations and you’re gonna become a rich person.” The world is not fair. You know they come with this statement “all men are created equal.” Well, it sounds beautiful, and it was written by some very wonderful people and brilliant people, but it’s not true because all people and all men [laughter] aren’t created—now today they’d say all men and women, of course, they would have changed that statement that was made many years ago. But the fact is you have to be born and blessed with something up here [pointing to his head]. On the assumption you are, you can become very rich.

Trump’s all-folks-are-not-created-equal view was nothing new. In a 1990 Playboy interview, he noted that when it came to success, “I’m a strong believer in genes.” Years later, in a CNN interview, Trump noted, “I think I was born with a drive for success. I had a father who was successful. He was a builder in Brooklyn and Queens. And he was successful and, you know, I have a certain gene. I’m a gene believer. Hey, when you connect two racehorses, you usually end up with a fast horse. And I really was, you know, I had a good gene pool from the standpoint of that.” And at a Trump rally earlier this year in Biloxi, Mississippi, the mogul proclaimed, “I have Ivy League education, smart guy, good genes. I have great genes and all that stuff which I’m a believer in.”

It seems that Trump does view the world as divided between those who have the genetic potential to succeed and those who don’t. In a 2010 interview, he remarked, “I really believe that a leader is born more so than made.” During a speech the following year in Australia, he asserted that dealing with pressure is a key to succeeding in business and that “some people cannot genetically handle pressure.” In another speech that year on how to succeed, Trump observed, “A lot of you people have a certain factor that make you successful. A lot of people don’t…I will talk about people that shouldn’t even be in the room. Because there are people that can’t do certain things. They can’t be entrepreneurial…Not everybody’s cut out to be an entrepreneur.”

So Trump believed that not everyone could be taught how to win in business and investing because not everyone had the right stuff. And at times he has been explicit about this. When Trump was promoting his best-selling book, The Art of the Deal, he was asked by an interviewer whether people would learn how to make a lot of money from his book. He replied, “Well they might learn that, and they also might learn that they shouldn’t try making too much money because I really have a theory that some people are not destined to make a lot of money, and that’s fine. And they can be very happy, in fact…Not everybody is meant to be a businessperson.”

That was not the message of Trump University. Its ads promised that its students—who paid up to $35,000 for courses—would learn Trump’s “secrets” for amassing wealth and be taught how to apply them right away. “Above all,” Trump said in the promotional video for this business, “it’s about how to become successful.” The pitch essentially said this: Anyone can do it. Yet Trump has frequently indicated that he doesn’t really buy that. Instead, you need good genes, Trump-type genes, to succeed and score big in this not-everyone-is-created-equal world. In that case, there’s not much point in trying to teach inferior Trump wannabes to be like the superior Trump, unless your aim is to redistribute wealth—from them to you. But, in keeping with Trump’s elitist belief in the power of genes, this setup might be called financial Darwinism. (To the guys with the good genes go the spoils—and the cash!) And soon the courts will determine if it’s also fraud.