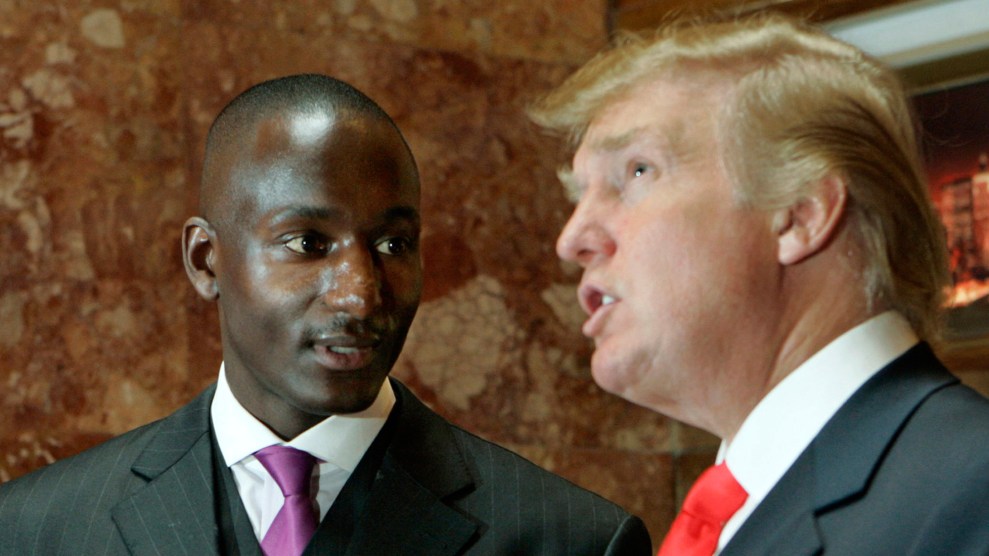 In this March 24, 2006 photo, Donald Trump speaks to Randal Pinkett, the winner of the fourth season of Trump's reality television show "The Apprentice." During his tenure at Trump Entertainment Resorts, Pinkett noticed the absence of minority executives in the organization.<a href="">Stuart Ramson</a>/AP

In recent days, Donald Trump, the presumptive GOP nominee, has been accused (by fellow Republicans!) of making “racist” comments and of being “too bigoted and racist.”  From the start, his presidential campaign has been marked by extreme rhetoric. He accused Mexican immigrants of being “rapists” and proposed a ban on Muslim immigration to the United States. In an exchange with CNN’s Jake Tapper in February, Trump would not renounce the support of white supremacist David Duke, the former grand wizard of the Ku Klux Klan.

Trump, who was a leading birther, has a long history of racially-charged statements and actions. In 1989, he took out full-page ads in New York City newspapers demanding the reinstatement of the death penalty. The ads were purchased shortly after the arrest of five teens—four African Americans and one Hispanic—for the brutal rape of a female jogger in Central Park, and they were widely seen as a call for the execution of these youths. (At the subsequent trial, the teens were found guilty and sentenced to prison terms, but more than a decade later, it turned out they had been falsely accused and convicted—a serial rapist confessed to the crime and DNA evidence supported his account—and their convictions were vacated.)

Several months after jumping into the Central Park rape case, Trump appeared in an NBC News special on race in the United States. He declared that certain black Americans now had an advantage over white Americans. Trump noted that if he were starting off in business at this point in time, he would “love” to be “a well-educated black.” He explained, “I really believe they do have an actual advantage today.” Later in the program, actor and director Spike Lee slammed Trump’s comments as “garbage” and “craziness.”

Watch Trump suggest that he might have done better as a black man:

A well-educated black has a tremendous advantage over a well-educated white in terms of the job market. And, I think, sometimes a black may think that they don’t really have the advantage or this or that but in actuality today, currently, it’s, uh, it’s a, it’s a great. I’ve said on occasion, even about myself, if I were starting off today I would love to be a well-educated black because I really believe they do have an actual advantage today.

If black men held an advantage over white counterparts, this certainly wasn’t reflected within Trump’s own company. The Associated Press reported last week that it had examined the senior levels of the Trump Organization over the past three decades and discovered “few, if any, black executives.” The report claimed former Trump officials could not remember “a single black vice president-level executive at Trump’s headquarters.”