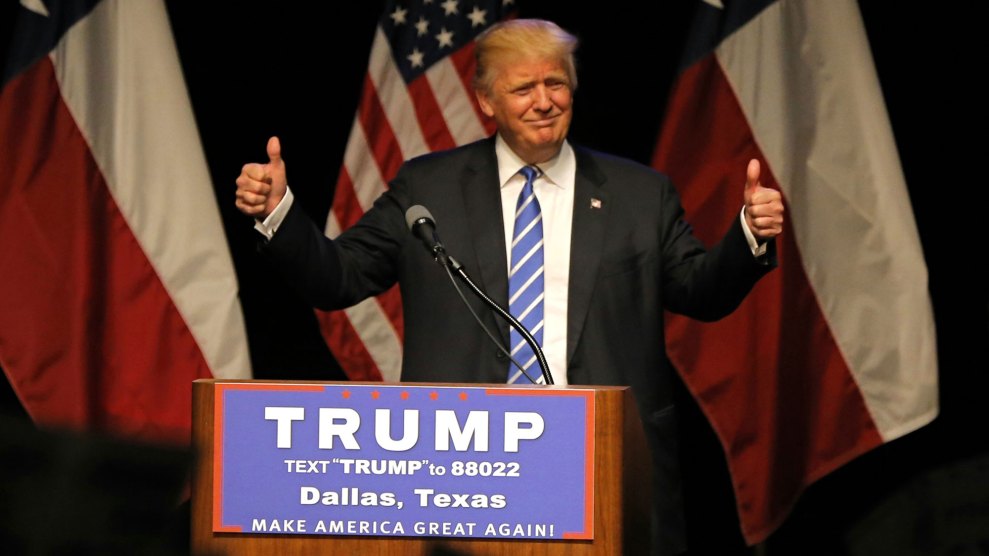 On Saturday afternoon in Phoenix, Donald Trump did something no Republican nominee has had to do in two decades: He promised to win Arizona.

He also promised to win Connecticut, said he would do “unbelievably well with the Mexicans,” and promised to solve “all of our problems” if elected president. But less than one month after he secured enough delegates to win the Republican presidential nomination, Trump’s usual bombast was surrounded by signs of his campaign’s own mortality.

For one thing, there was the fact that he was even appearing in Phoenix at all. Arizona was a strong state for Trump in the presidential primary, but it is an unusual place for a candidate to spend much time after winning the nomination. The state hasn’t voted for a Democrat in a presidential year since 1996. No Democrats hold statewide office here, and Mitt Romney won the state by more than 10 points in 2012. If Arizona were to become a battleground state, it would most likely signify a landslide. But Clinton leads Trump in Real Clear Politics‘ polling average of the state, and Trump’s rally on Saturday, at the Phoenix Memorial Coliseum—known locally as the “Madhouse on McDowell”—seemed to belie the state’s deep-red reputation. Trump told the crowd he was “up big in the state,” but then said it was “a very important state” and he would win it in the fall. Speaking a short while earlier, former Arizona Gov. Jan Brewer, who was joined at the event by Maricopa County Sheriff Joe Arpaio, drew a cheer from the crowd when she promised to “keep Arizona red.” They just might; but the biggest story was that it even needed to be said.

Throughout the event, Trump projected an air of confidence—”I feel like a supermodel except times 10,” he said of his media saturation—but there were signs that all was not going so swell with his campaign. He mocked a Politico story that quoted a Trump adviser suggesting Trump would consider giving up his presidential bid for the right amount of money. According to the story, Trump might accept a $150 million buyout. To hoots from the crowd, Trump boasted that he wouldn’t accept five times that much—but, he conceded, if they offered him $5 billion, he’d be foolish not to consider it. In the build-up to his grand entrance, one surrogate after another had engaged the audience in a call and response. The question was “Who’s the nominee?” After the week he’d had, it was starting to feel a little less than rhetorical.

In his most audacious promise, Trump recalled how he had won victory after victory in northeastern blue states during the Republican primary. His strong showings were a sign, he suggested, that he could compete and win in places like Connecticut in the general election. (A cynical person might note that Republican primaries are usually won by Republicans.) But Hartford will have to wait for another time; for now, he’s just trying to win Arizona.