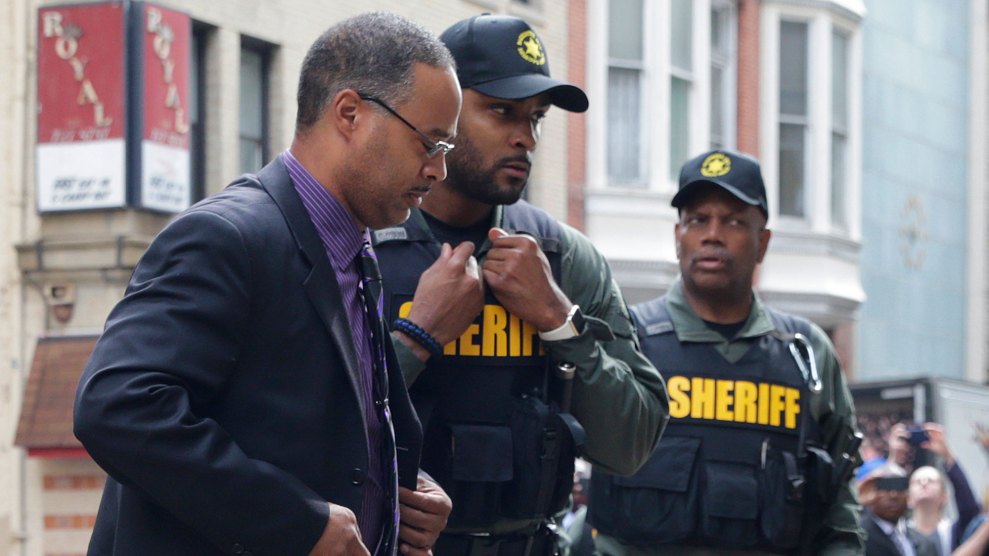 Caesar Goodson, the Baltimore police officer facing the most serious charges in the death of 27-year-old Freddie Gray while in police custody last April, was found not guilty on all charges by a judge on Thursday morning. Goodson had faced charges of second-degree “depraved heart” murder, manslaughter, assault, reckless endangerment, and misconduct in office.

Prosecutors had argued that Goodson, who drove the police van in which Gray sustained his fatal injuries, was responsible for fastening Gray’s seatbelt but did not. And they alleged that Gray’s neck injury occurred after Goodson deliberately drove around in a reckless manner while Gray was handcuffed, shackled at the legs, and unrestrained by a belt—what’s known in law enforcement as a “rough ride.” They also argued that Goodson had five opportunities to get Gray medical attention after his injury occurred. But Goodson’s attorneys countered that he deferred to the judgment of the officers who had helped to put Gray in the van, none of whom fastened his seatbelt or took Gray’s initial request for medical attention seriously (Gray said he had injured his leg). They also argued that Gray’s neck injury—the one that proved fatal—occurred later in the ride, leaving fewer opportunities for Goodson to attend to it. Explaining his ruling, Judge Barry Williams said that Gray’s neck injury had “manifested itself internally,” so it would not have been evident to the average person.

Goodson was the third of six officers to face trial in Gray’s death. Officer William Porter’s trial ended in a mistrial in December; officer Edward Nero was found not guilty by Judge Williams last month. At least two officers charged in Gray’s death, including Porter, have sued Baltimore state’s attorney Marilyn Mosby for defamation. Two more officers’ are scheduled to to stand trial in July, while Porter’s retrial is scheduled for September. The final officers’ trial will start in October.