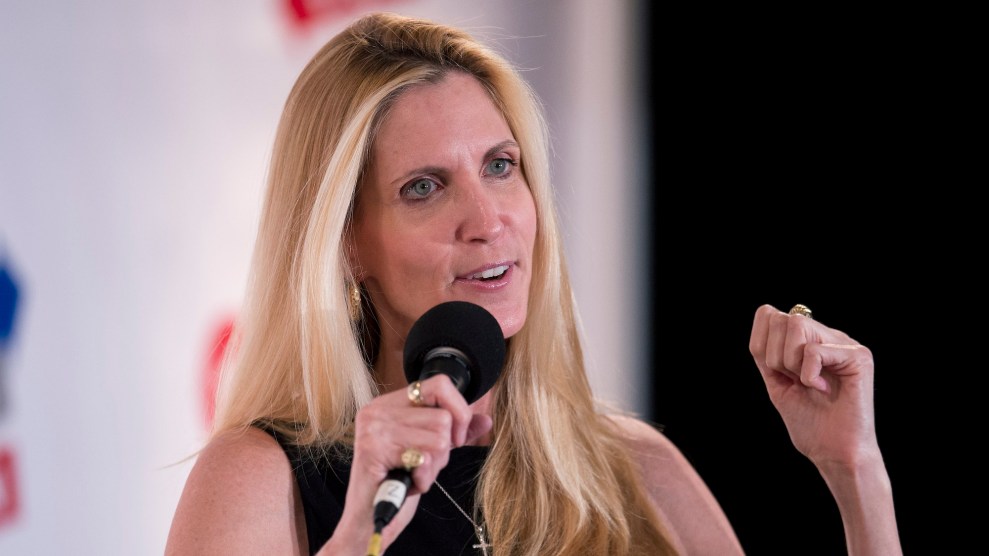 Right-wing provocateur Ann Coulter has demonstrated that of all the Donald Trump supporters out there in the political media, she may well be the Trumpiest. Though the presumptive GOP nominee on Tuesday night tried to douse the fire he started when he referred to born-in-the-USA federal judge Gonzalo Curiel as “Mexican,” a day earlier he pressed his surrogates and supporters to sustain the attack on Curiel, who is presiding over a fraud case against Trump and Trump University.

Coulter did precisely that.

In a column that came out Wednesday—presumably written before Trump issued his non-apology on Tuesday night—Coulter rushed to Trump’s defense and made fun of “the media” calling Trump a “racist.” She contended that Trump was right to cite Curiel’s heritage in questioning his fitness to preside over this case. And she blasted the “Republican Brain Trust” for denouncing Trump on this point, claiming that “elected Republicans are pathetic, impotent media suck-ups.”

As if to prove her fealty to Trump, Coulter used the same language that got Trump into trouble. She called Curiel a “Mexican.” Here is how the column began:

Annoyed at federal judge Gonzalo P. Curiel’s persistent rulings against him in the Trump University case (brought by a law firm that has paid hundreds of thousands of dollars for speeches by Bill and Hillary), Republican presidential nominee Donald Trump said that maybe it’s because the judge is a second-generation Mexican immigrant.

Curiel, as has been noted several thousand times, was born in Indiana. He is not a Mexican. He is an American. But to Trump and Coulter, his family background renders him something other than American. They are both tribalists who seem to believe ethnic heritage trumps citizenship. Now that Trump is using a TelePrompTer and reading his remarks, perhaps Coulter can help her pal by writing his speeches.