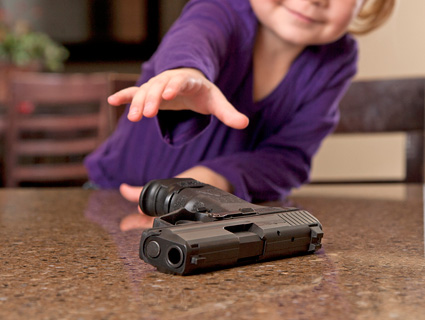 In an in-depth investigation in 2013, Mother Jones found that guns kill hundreds of children per year in the United States. Many die in homicides, and many others die in accidents—mostly when children themselves pull the trigger. The kids shooting themselves or others have often been as young as two or three years old. Invariably these “tragedies” result from adults leaving unsecured firearms lying around in their homes or, in some cases, in their cars.

Since our investigation, the advocacy group Everytown for Gun Safety has collected additional data confirming the scope of the problem. As the New York Times reported on Thursday, during one week in April four toddlers around the country killed themselves with guns, and a mother was fatally shot by her two-year-old while driving, after the child apparently picked up a weapon that slid out from under the driver’s seat. The data remains stark: “In 2015, there were at least 278 unintentional shootings at the hands of young children and teenagers, according to Everytown’s database,” the Times reported. “A child who accidentally pulls the trigger is most likely to be 3 years old, the statistics show.”

Equally stark is the response from the gun lobby. There has been growing debate about laws aimed at reducing the problem, which, as our investigation showed, has long gone underreported. Larry Pratt, a leading figure among hardline pro-gun activists, argues that tighter gun regulations are not the answer. In comments to the Times, Pratt called the hundreds of child gun deaths that occur each year “occasional mishaps”:

“It’s clearly a tragedy, but it’s not something that’s widespread,” said Larry Pratt, a spokesman and former executive director of Gun Owners of America. “To base public policy on occasional mishaps would be a grave mistake.”

As the Times piece notes, 27 states now have laws that hold adults responsible for letting unsupervised children get their hands on guns. Gun safety advocates have increasingly pushed for tougher laws requiring owners to use trigger locks, gun safes, or other measures for safe storage and use. Another potential solution that’s been gaining new interest is smart-gun technology. But gun lobbying groups including Gun Owners of America and the National Rifle Association have long opposed these policies across the board, claiming that they threaten Americans’ Second Amendment rights.

Even in states with laws on the books, the contentious politics tends to quash appetite among prosecutors for holding adults accountable when young children accidentally kill. Here, the data goes from stark to perhaps stunning: In 2013 we documented 52 cases where adults had left their guns unsecured—but we could only find four people who were held criminally liable for the children’s deaths.

The following year I covered this problem in more detail, in a story chronicling the rise of a new advocacy group, Moms Demand Action for Gun Sense in America. Particularly in more rural communities, a prevailing theme has been that parents—including a few who accidentally shot their own children—have already suffered enough and shouldn’t be punished:

Last Christmas Eve in Lancaster, Pennsylvania, a man who’d been “messing with” a 9 mm handgun unintentionally shot and killed his two-month-old daughter as she slept in her glider. The coroner ruled the death a homicide, yet local law enforcement officials said they were undecided about pursuing criminal charges. Typically that might’ve been the end of it, but Moms Demand Action voiced outrage via social media and the local press. Within two weeks the DA announced plans to prosecute. (He said no outside group influenced his decision.)

“While we fully support the father being held accountable for this crime, we also acknowledge the horrific grief this family is experiencing,” Moms Demand Action said after the charges were announced. “We hope their tragedy can serve as an example that encourages others to be more responsible with their firearms.” The father later pleaded guilty to involuntary manslaughter and reckless endangerment, which could have brought up to 15 years in prison. He got six years’ probation and no jail time.

Moms also drew attention to a case in February in North Carolina, where a three-year-old boy wounded his 17-month-old sister after finding a handgun that their father—who wrote a parenting advice column in a local paper—had left unsecured. (The infant recovered.) “The parents have been punished more than any criminal justice system can do to them,” a captain from the county sheriff’s department said soon after the shooting. After Moms swung into action, the father was charged with failure to secure his firearm to protect a minor; his case is pending.

“All too often DAs are loath to get involved, saying a family has suffered enough,” Watts says, “especially in states where laws are inadequate…This idea of ‘accidental’ gun deaths, when something is truly negligence, has to be remedied.” 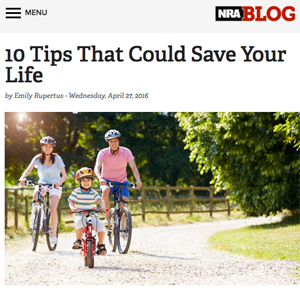 For its part, the gun lobby prefers to keep the focus on other fears. On Thursday, the NRA made no reference to the latest data on child gun deaths. On its blog, a post—topped by an image of a toddler biking—offered “10 Tips That Could Save Your Life.” The “home” segment of the list made no mention of safely storing firearms, but instead focused on the specter of a home invasion. “To deal with this possibility,” it said, “be prepared by making a home defense plan and setting up a safe room with your family.” The room should be equipped with a phone for calling 911, it said, and a “personal protection device” such as “mace, batons, Tasers, stun guns, or firearm.”

The NRA’s Twitter feed otherwise attended to politics, denouncing an apparent conspiracy by the Social Security Administration to conduct “the largest gun grab in American history,” and firing away at “Hillary Clinton’s 6-part plan to disarm citizens — and rip apart the #2A.”