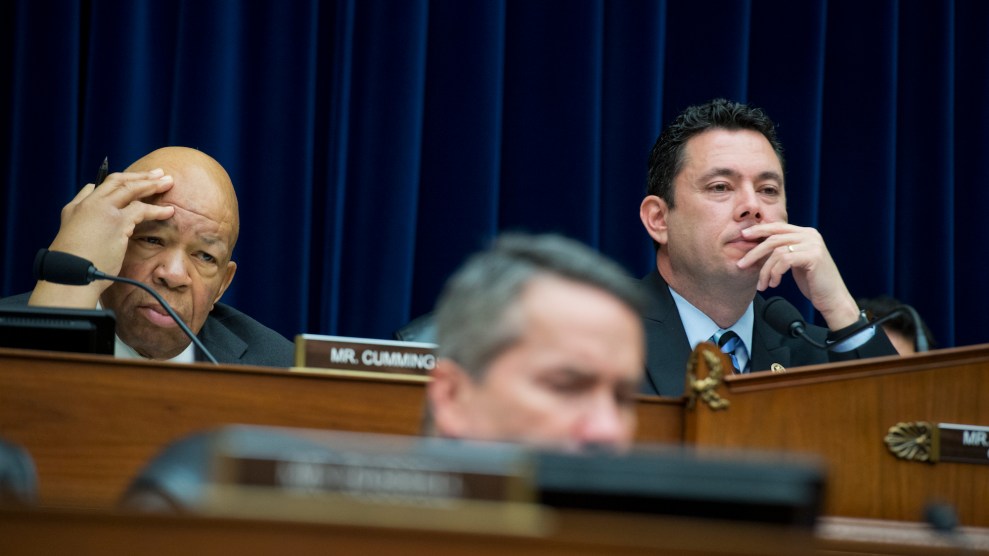 After the New York Times Magazine published a controversial profile of Ben Rhodes, the White House’s deputy national security adviser for strategic communications, conservatives exploded in outrage over the article’s portrayal of Rhodes manipulating the media to secure passage of the Iran nuclear deal. Republican senators have called for Rhodes to resign, and the House Oversight Committee even held a hearing on Tuesday to look into “White House Narratives on the Iran Nuclear Deal.”

But, as our David Corn noted yesterday, one of the three witnesses has plenty of experience in planting “false narratives:” John Hannah, a former aide to Vice President Dick Cheney who played a key role in promoting the flawed intelligence behind the invasion of Iraq. Corn wrote that “Hannah was one of the architects of the speech then-Secretary of State Colin Powell gave to the United Nations in February 2003 that was designed to pave the way to war.” And he’s not the only one who noticed.

Rep. Elijah Cummings (D-Md.), the ranking Democrat on the House Oversight Committee, blasted Hannah in his opening statement at the hearing. “If our goal is to hear from an expert who actually promoted false White House narratives, then I think you picked the right person,” he said. “But if our goal is to hear from someone who was not involved in one of the biggest misrepresentations in our nation’s history, then you picked the wrong person. Listening to John Hannah criticize anyone else for pushing a false White House narrative is beyond ironic. He and Dick Cheney and their colleagues in the White House wrote the how-to manual on this.”

Hannah wasn’t the only perfectly wrong choice on the three-man panel. Another witness, Michael Rubin, was a Pentagon official during the invasion of Iraq and later worked for the Coalition Provisional Authority, the post-war American occupation government. Rubin was a strong backer of Ahmad Chalabi, the late Shiite dissident who used fake intelligence to push the war in Iraq and whom many neoconservatives promoted as a potential future Iraqi leader. Rubin backed Chalabi and defended him even after Chalabi was suspected of passing intelligence to Iran in 2004. The third witness, Michael Doran, was also a Bush-era official at the Pentagon and the National Security Council.

Cummings, for his part, couldn’t figure out why the hearing was taking place at all. “Other committees have held dozens of substantive hearings on the Iran agreement,” he said. “Do you know how many this committee has held? Zero…Yet, all of a sudden, now our committee is rushing to hold today’s hearing without even the one-week notice required by House rules.”