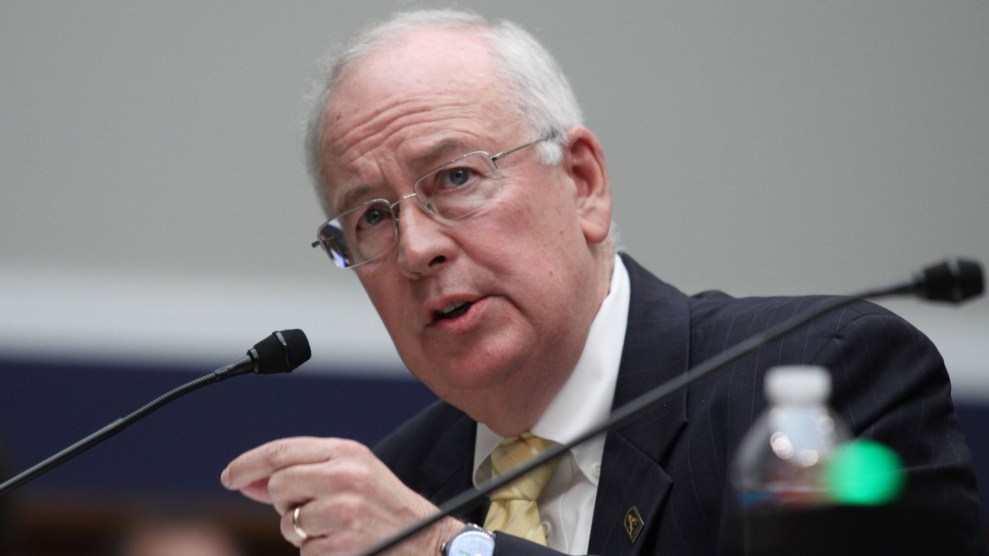 Update, 8/19/16: Kenn Starr has resigned his tenured position on the Baylor law school faculty in what the university describes as a “mutually agreed separation.”

Baylor University has dismissed head football coach Art Briles and demoted president and chancellor Ken Starr—infamous for his dogged investigations of the Clintons in the 1990s—following Thursday’s release of a report highlighting the school’s “fundamental failure to implement Title IX” in its handling of a series of sexual assaults involving several football players dating back to 2009.

“We were horrified by the extent of these acts of sexual violence on our campus,” said Board of Regents chair Richard Willis in a statement. “This investigation revealed the University’s mishandling of reports in what should have been a supportive, responsive and caring environment for students.”

The report, conducted by the Philadelphia-based law firm Pepper Hamilton, claims “the choices made by the football staff and athletics leadership…posed a risk to campus safety and the integrity of the university.” The university told Mother Jones in February that the assaults “contradict everything we believe on a human level and as a Christian institution” and that it would implement measures to curb sexual violence on campus.

Despite being stripped of his presidency, Starr will continue as Baylor’s chancellor. Interestingly enough, he recently expressed regret over the renewed attacks on Clinton’s legacy at a May 16 panel at the National Constitution Center, calling the former president “the most gifted politician of the baby boomer generation,” according to the New York Times.

You can read the report below and the firm’s recommendations here. Scroll past the report for excerpts.

The University as a whole failed to prioritize Title IX implementation. Implementation efforts were slow, ad hoc, diffuse, and uncoordinated. Senior leadership failed to recognize the significance of the national context, including evolving guidance from [the Department of Education’s Office of Civil Rights] and high profile examples of institutional failures at peer institutions. As a result, Baylor lacked the sufficient infrastructure and an informed policy…[S]enior leadership lacked consistent or meaningful engagement in the University’s Title IX functions.

Baylor failed to maintain effective oversight and supervision of the Athletics Department as it related to the effective implementation of Title IX. Leadership challenges and communications issues hindered enforcement of rules and policies, and created a cultural perception that football was above the rules.

The choices made by football staff and athletics leadership, in some instances, posed a risk to campus safety and the integrity of the University. In certain instances, including reports of a sexual assault by multiple football players, athletics and football personnel affirmatively chose not to report sexual violence.

Football staff conducted their own untrained internal inquiries, outside of policy, which improperly discredited complainants and denied them the right to a fair, impartial and informed investigation…In certain instances, including reports of a sexual assault by multiple football players, athletics and football personnel affirmatively chose not to report sexual violence and dating violence to an appropriate administrator outside of athletics. In those instances, football coaches or staff met directly with a complainant and/or a parent of a complainant and did not report the misconduct. As a result, no action was taken to support complainants, fairly and impartially evaluate the conduct under Title IX, address identified cultural concerns within the football program, or protect campus safety once aware of a potential pattern of sexual violence by multiple football players.

The football program’s separate system of internal discipline reinforces the perception that rules applicable to other students are not applicable to football players, improperly insulates football players from appropriate disciplinary consequences, and puts students, the program, and the institution at risk of future misconduct.

Administrators engaged in conduct that could be perceived as victim-blaming, focusing on the complainant’s choices and actions, rather than robustly investigating the allegations, including the actions of the respondent. In many instances, student conduct investigators conducted cursory investigations and failed to identify and interview readily apparent witnesses or gather relevant evidence. Student conduct investigators also applied the preponderance of the evidence standard of proof in an inconsistent manner, and in many instances, required a far greater level of proof than preponderance.

The overwhelming majority of cases did not move forward to an adjudicative hearing, with only an extremely limited number of cases resulting in a finding of responsibility or significant sanction. Many complainants did not move forward with the University’s Title IX process…The University failed to conduct sufficient inquiry into individual barriers to participation, which in some instances were directly related to barriers created by conversations with University personnel that discouraged, rather than encouraged, participation in the University’s Title IX processes. Even in those cases where a complainant did choose to move forward, Baylor did not pursue hearings in the majority of reports, sometimes because of an erroneous determination that Baylor did not have jurisdiction in off campus matters or because the investigator in Judicial Affairs improperly determined that there was not a preponderance of the evidence based on an inadequate or uninformed investigation.