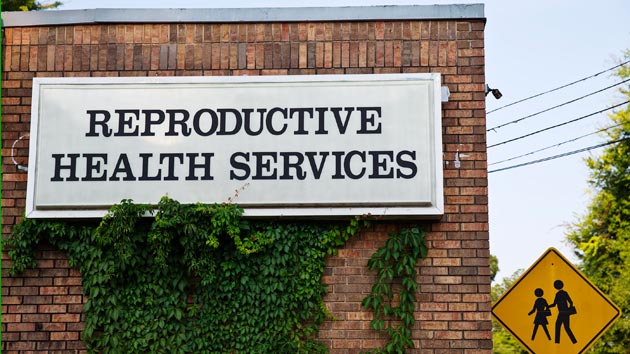 A clinic in Montgomery, AlabamaBrynn Anderson/AP

Alabama lawmakers passed two bills in the waning hours of their legislative session on Wednesday that could close two of the state’s five abortion clinics and make it harder for women to receive abortions in their second trimester.

One of the bills prohibits abortion clinics from operating within 2,000 feet of an elementary or middle school—the same restriction that applies to sex offenders. If Alabama Gov. Robert Bentley signs the bill, it may force two of the state’s five abortion clinics to close, including a clinic in Huntsville that is the only one providing abortion care in the northern half of Alabama. The clinic just moved to its current location, across the street from a school, in 2014, in order to comply with other abortion restrictions passed in Alabama in 2013.

The sponsor of the bill, Alabama state Sen. Paul Sanford, likened the restrictions to those imposed on sex offenders. “We can put a restriction on whether a liquor store opens up across the street and make sure pedophiles stay away from schools,” he told the Times Daily in February. “I just think having an abortion clinic that close to elementary-age school children that actually have to walk on the sidewalk past it is not the best thing.”

The second bill would ban a common second-trimester abortion procedure.

Throughout the day on Wednesday, Democrats tried to mount a filibuster in order to run out the clock on the legislative session before a vote could be brought on both bills. But Republicans gathered enough votes to move the legislation forward.

Democrats who opposed the bills voiced their concerns over the House’s rushed proceedings. “You have no right to continue to cut out debate,” Rep. Mary Moore said. “That’s what the process is all about. That’s what makes democracy different than dictatorships.”

After Speaker of the House Mike Hubbard attempted to start a vote on one of the abortion bills, members of the House Black Caucus entered the chamber and began singing “We Shall Overcome.” In response, Hubbard called security, saying members couldn’t hear the floor vote.

“With two hours left in session, the Republican Caucus shut down debate and bent the rules to jam through this misguided legislation,” said Nikema Williams, vice president of public policy at Planned Parenthood Southeast, in an emailed statement. “This legislation is bad for women and bad for Alabama. It goes to show how issues of racial justice and access to health care are interconnected and cannot be fought alone.”