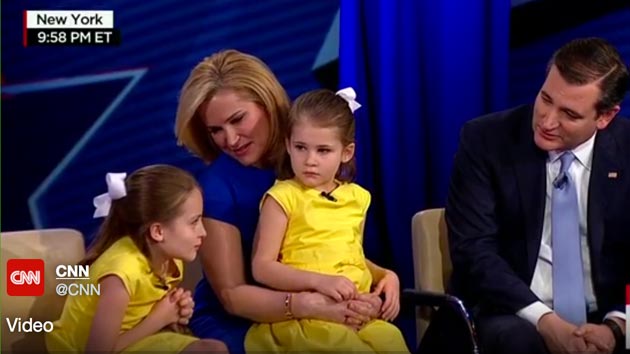 The CNN town hall with Ted Cruz and his family on Wednesday night began with host Anderson Cooper talking to the candidate about the usual political subjects, including his thoughts about GOP front-runner Donald Trumps’ vocal opposition to the current system of gathering delegates in advance of the Republican National Convention. Cruz said Trump is acting like a “union boss thug” by threatening delegates and noted that he’s only complaining about the process because recently he has lost several key primaries. “In the last three weeks there have been 11 elections in four states. And we have beaten Donald in all of 11 of them,” Cruz said. “He’s unhappy about that.”

When Heidi Cruz joined her husband on stage and audience members came to the mic, the questions moved from the political to the personal: What was their first date? (A dinner when the two were working on the Bush campaign in 2000.) What did she think was his “most annoying” quality? (His iPhone.) Cruz also told the audience that he loves movies but his wife isn’t interested in them, and that, after The Princess Bride, his favorite movies are The Godfather series, including The Godfather Part III.

But the real highlight of the evening came when Cruz’s two young daughters, dressed in identical yellow dresses, were asked whom they would first want to invite to visit the White House. Caroline, whose eighth birthday is on Thursday, and five-year-old Catherine, were shy about naming their favorite pop star, but their mother, Heidi, answered for them: “The girls would love to have their first guest be Taylor Swift,” she said.

The girls may not have had much to say on the Cruz versus Trump delegate fight, but they weighed in on a different kind of “Bad Blood” (#sorrynotsorry). The whole family exchange was pretty adorable.

This is the best thing on the Internet tonight https://t.co/e9ghsbI9Kx