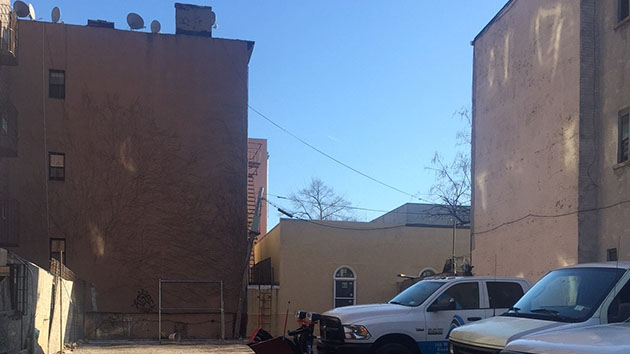 Residents of 94 Franklin Avenue in Brooklyn’s Bedford-Stuyvesant neighborhood came home one day in 2014 to news that they would have to remove their personal belongings from the yard behind their building. In the months following, construction crews and large machinery occupied the area, blocking the back door and erecting a wall right up against it.

That wasn’t merely an inconvenience. It was a violation of New York’s housing code. By July 2015, the residents of 94 Franklin were evicted.

Landlords have long resorted to extreme measures in order to clear out low-income tenants and raise rents in gentrifying neighborhoods—from turning off the heat to demolishing interior walls—but the owner of 94 Franklin may have set a new standard for forcing people from their homes with impunity. It’s part of a trend of increasingly aggressive actions taken by landlords in up-and-coming parts of New York, Washington, San Francisco, and other fast-developing cities across the country.

The structure behind 94 Franklin began as a tall slab, according to Jean Stevens, an attorney with Brooklyn Legal Services Corporation A who is currently representing the tenants in a lawsuit against the landlord, but it soon became an entire building, with a roof and windows. Residential buildings need to have rear egress. As first reported by Gothamist, when 94 Franklin lost its back door access, it was in violation of city housing law, and the city evicted the tenants.

According to Stevens, this is unprecedented. “I have never seen anything like this before,” she says. “I haven’t been practicing for a million years in New York, but one of my supervisors, who is in his seventies, said he has only seen this once before, and it wasn’t exactly the same. This is very unusual, and very creative.”

Stevens isn’t sure why the city has not stepped in to demolish or alter the new building, given that it is illegal, she says. “That’s part of our question,” Stevens explains. “Why did the city keep letting this go? Why not demolish it, or move it back into the lot? We don’t know. So we’re asking for an administrator to step in and address these issues.”

If successful, the tenants would be granted an impartial administrator to take over the building from the current landlord. The administrator would face an even larger project, given that the building has fallen into disarray since the tenants were evicted last summer, according to tenants who managed to take pictures. Pipes have burst, ceilings have caved in, and extensive water damage has inflicted several units.

The landlord’s legal representative, Steve Rubinshteyn, did not respond to a request for comment. In a court filing, Rubinshteyn dismissed the tenants’ allegations, writing, “Clearly in their zeal to attack, tarnish, and demonize the owner and owner’s reputation and to impugn the owner’s motives, tenants have put the cart before the horse.”

Stevens is not clear on the function of the new building, but she says its erection is fully responsible for the tenants’ eviction. “If not for the landlord’s actions, none of this would have happened,” Stevens said. “That provoked the city to come in and say this is too unsafe and issue the vacate order. And now the landlord can sit tight and do nothing and the issues can exacerbate.”