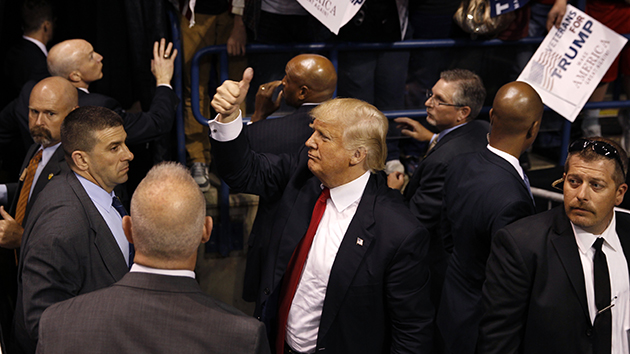 Following Donald Trump’s overwhelming victory last week in his home state of New York and his impressive sweep across five East Coast states on Tuesday, Republican Party leaders may be finally reaching the final stage of Trump grief: acceptance that the real estate mogul is likely to be their presidential nominee. Some GOP insiders are even coming to terms with the distinct possibility that the primary race may not reach an open convention and that Trump may well bag the necessary 1,237 delegates to win the nomination, according to two Republican National Committee members.

This recognition began to sink in last week at the RNC’s spring meeting in Hollywood, Florida, where the committee’s 168 members convened to discuss party business. Trump’s resounding New York victory earlier that week “kind of shocked everyone into reality” and “had an enormous effect at the RNC meeting,” says one longtime RNC member, who asked to remain anonymous. “All of a sudden people started accepting the fact, either happily or regretfully depending on who you are, that there seems to be a clear movement here. So that helped Trump in Hollywood, Florida, at the meeting. People were much more open to him then, in my opinion.”

Trump’s triumph in all five states in Tuesday’s contests—he handily won Connecticut, Delaware, Maryland, Pennsylvania, and Rhode Island—improves his chances of clinching the nomination before the national convention in July. It also put Sen. Ted Cruz in the position where it is now impossible for him to win a majority of delegates by the end of the primaries.

“There is a growing acceptance of the probability that Donald Trump will be the GOP nominee,” says Randy Evans, an RNC member from Georgia and a former Newt Gingrich backer who attended last week’s gathering. He notes that Trump’s dominant performance in the recent primaries is causing some RNC members to conclude that Trump will be the party’s nominee: “For some it is an eager acceptance to get the process over and move on; for others it is a reluctant acceptance of the inevitable.” Within RNC circles, it seems at this point, there is no consensus in favor of a major convention fight in Cleveland aimed at thwarting Trump. Many RNC members may be shifting their thinking to accept the argument promoted by Trump that he has indeed won the most votes and the most delegates and thus deserves the nomination more than anyone else. And some RNCers appear to be moving to a new stage: wishful thinking. That is, they are wondering whether Trump might not be a lousy general election candidate or a burden to the party.

Other RNC members are still hoping Trump will be defeated—even if the window for the #NeverTrump forces is closing. The next contest is in Indiana on May 3, where Trump will attempt to dispense with Cruz as the Texas senator tries to stage a comeback and keep alive his hope for snagging the nomination at the convention. Trump is “clearly the front-runner,” says Henry Barbour, an RNC member from Mississippi, “but it’s not inevitable.” Yet for some of his fellow RNCers, now is the time to submit to the Trump reality.