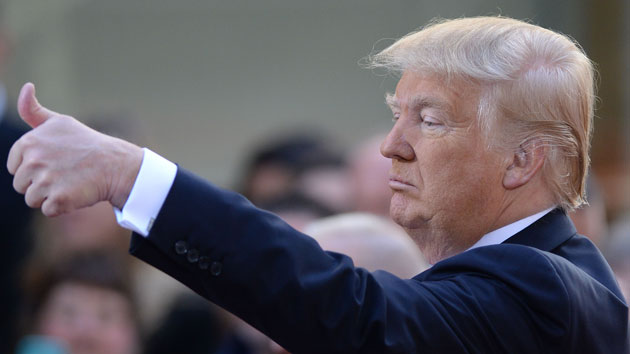 Donald Trump’s political director told a room full of Republican bigwigs on Thursday that if the tower-dwelling steak magnate is the party’s nominee for president, he will redraw the electoral map in November. Per the New York Times:

As the Republicans ate oysters in a dim, stuffy conference room overlooking the Atlantic Ocean, Mr. [Rick] Wiley walked them through a slide show that predicted victory for Mr. Trump not just in swing states with large Hispanic populations like Nevada, Colorado and Florida, but in states that Republicans have not captured since the 1980s: Pennsylvania, Michigan, Minnesota, Wisconsin and Connecticut.

This sounds crazy because it is, but it’s not a kind of crazy that’s unique to Trump. Republican nominees (or prospective nominees) always say this.

In a video for Republican donors in June 2008, John McCain’s campaign manager, Rick Davis, showed off a map highlighting states McCain had in the bag and states that might be in play. The list of states that were Republican locks included three that Barack Obama ultimately won: Indiana, North Carolina, and Virginia. The list of states that McCain’s campaign considered battlegrounds included California and Connecticut. Oh, and Pennsylvania, Michigan, Minnesota, and Wisconsin.

Okay, that was 2008. It was a long time ago. We didn’t have self-driving cars or even face-swap back then. But in 2012, Republican nominee Mitt Romney again proposed to redraw the electoral map by flipping Midwestern states the party hadn’t won since the Ronald Reagan era. His campaign spent much of the final week of the race in Pennsylvania. It considered Wisconsin the new Ohio. In October, Romney and his backers went on the air in Michigan and Minnesota.

Trump is out of step with his party’s previous standard-bearers on many things, but when it comes to overstating his electoral chances in blue states, he talks a lot like the establishment.