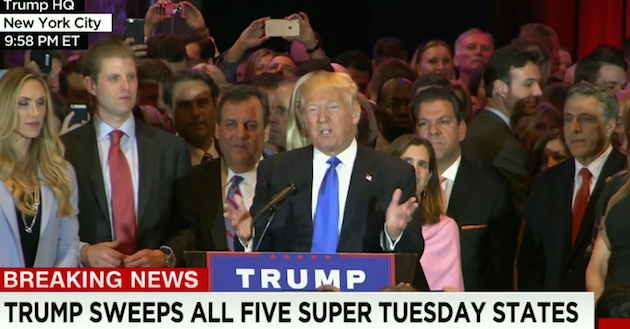 Donald Trump dominated all five states in Tuesday’s East Coast Republican primaries, a sweep that brought him at least 105 delegates and pushes him further along his path to securing the Republican presidential nomination and avoid a contested convention.

The Republican front-runner celebrated his impressive night from Trump Tower in New York, surrounded by his family and supporters including New Jersey Gov. Chris Christie, where he declared the Republican primary race all but over. He also continued his recent calls for Gov. John Kasich and Sen. Ted Cruz to end their campaigns.

“I consider myself the presumptive nominee, absolutely,” Trump told reporters. “Senator Cruz and Governor Kasich should really get out of the race.”

The real estate magnate went on to ridicule his two rivals in light of their recent announcement that they were uniting to defeat Trump and force a brokered convention—a strategy that started to collapse a day after it was announced.

“Governor Kasich and Senator Cruz have really, really hurt themselves with a faulty deal,” he said. “Politicians, all talk, no action.”

When asked about reports he would soon be striking a more “presidential” tone, Trump hinted that although he might act differently, his “thought process” would remain the same.

“If you have a football team and you’re winning, and you make it to the Super Bowl, you don’t change your quarterback,” Trump said.

Trump concluded his victory speech by suggesting the only factor driving Hillary Clinton’s success is the “woman’s card” and that if she were a man, she wouldn’t be able to get even 5 percent of the vote. In her victory speech, Clinton referred to Trump’s previous reference to her playing the “woman’s card” and said that if that meant standing up for equal pay for equal work, and health care for women, “deal me in.”