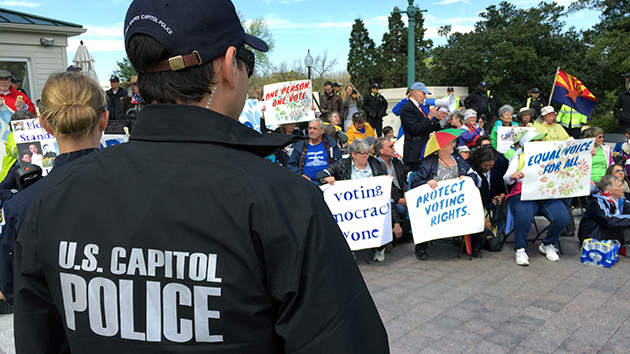 A group of 85 "Democracy Spring" activists pushing for less money in politics and for clean elections was arrested outside of the US Capitol on Tuesday.AJ Vicens

The day after more than 400 people were arrested on Capitol Hill, US Capitol Police on Tuesday arrested 85 mostly elderly activists who were blocking the south entrance of the Capitol. They were all participating in “Democracy Spring,” a weeklong series of rallies and marches on the Capitol aimed at bringing attention to the control of money over politics in Congress and what organizers say are unfair voting laws.

Each day of rallies focuses on a different theme. Tuesday’s demonstration was called “Elders Standing for Democracy Spring,” (Monday’s was “All On Board”). Events later in the week include “Racial Justice Day,” “Labor Solidarity Day,” “Youth and Student Day,” and finally, on Saturday, “Climate Justice Day.” Democracy Spring members include people from every state, backed by dozens of progressive organizations and endorsed by celebrities like Mark Ruffalo, Talib Kweli, and Sam Waterston. They are pushing Congress to pass four bills they say will begin the process of reducing money’s influence on legislation and ensuring voting access for more people.

“The reason that we are here is because our country has become a corpotocracy,” said Bil Lewis, from Cambridge, Massachusetts, who was dressed as President James Madison in the hopes of inspiring curiosity among bystanders. He participated in the 140-mile march from Philadelphia to Washington, DC. “The will of the people is no longer being done.”

Lewis said he spent the morning visiting offices in the Capitol and trying to talk to members about money in politics.

“Congress knows what’s going on,” he said. “They are forced to spend hours and hours making calls, asking for donations, and when they get those donations from the big corporation or rich donors, they then are virtually required to pass certain bills which benefit those people and hurt we the people.”

Bil Lewis really cares about getting money out of politics. pic.twitter.com/ankZFMGNyh

After a short rally outside of Union Station, several hundred people marched the several blocks to the Capitol, chanting, “We’re here, we’re elders, we’re fearless, get used to it,” and “Our country’s not for sale, we’re not too old to go to jail.”

As soon as the group arrived at the south entrance of the Capitol, several dozen sat down and the US Capitol Police encircled them. After being told that they would be arrested if they didn’t disperse, the police began an orderly and calm arrest process. In all, 85 people were picked up for “unlawful demonstration activity,” according to a Capitol Police statement provided to Mother Jones. They were processed on the scene and released.

Jill, an elderly election worker from New Jersey who was not arrested and asked that her last name not be used, said she was there to support efforts for less money in politics and for elections with candidates who are not in the pockets of wealthy donors.

“I think it’s become apparent to a lot of us that the whole political process in our country is really under the control of a handful of people, and by the time we get to make a choice in November, the fix is already in, because all of the candidates, typically, are ones who are going to do what the establishment, the oligarchy, wants from them,” Jill said. A supporter of Vermont Sen. Bernie Sanders, she also expressed concern about irregularities at polling places, with electronic voting machines that don’t accurately record votes, calling the election process in many places “a travesty.”

As the arrests were taking part outside, Lauren Windsor, a Washington, D.C. journalist and activist who hosts a YouTube show called “The Undercurrent,” went into the Capitol and tried to ask Senate Majority Leader Mitch McConnell (R-Ky.) about the protesters outside and their calls for less money in politics. McConnell stayed silent and kept walking while a woman with McConnell tried to block Windsor’s path:

After the rally, a group of Democracy Spring activists went to the Republican National Committee building to try to disrupt House Speaker Paul Ryan’s press conference, when he reiterated that he will not seek or accept a nomination to be the Republican candidate for president.

#DemocracySpring activists in the alley behind the RNC during Paul Ryan’s press conference. pic.twitter.com/TabmEf957s

The activists made a circle around the building and tried to prevent the media from entering to cover Ryan’s press conference. They also tried to confront him when he left the building, but they weren’t successful on either front.