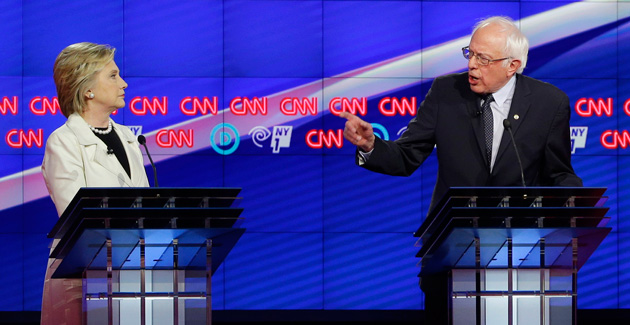 Hillary Clinton and Bernie Sanders met in Brooklyn Thursday night for the latest debate of the presidential season. The two Democrats have grown increasingly confrontational in recent weeks, as Sanders has run up a streak of electoral victories but has largely failed to shrink Clinton’s pledged delegate lead. Sanders has questioned whether Clinton is “qualified” to be president. Clinton, meanwhile, has repeatedly mocked an interview Sanders gave to the New York Daily News, arguing that it showed a lack of understanding of key issues.

Here are some of the highlights from Thursday’s debate.

Fireworks over who’s qualified to be president. The debate immediately turned quarrelsome. CNN’s Wolf Blitzer opened with a question about whether Sanders stands by his attacks on Clinton’s qualifications. “Does Secretary Clinton have the experience and intelligence to be president? Of course she does,” Sanders said. “But I do question her judgment. I question a judgment which voted for the war in Iraq, the worst foreign policy blunder in the history of this country.” Sanders also said he was concerned about Clinton’s judgment when it comes to her past support for controversial trade deals and the assistance she is receiving from super-PACs.

“Senator Sanders did call me unqualified,” Clinton shot back. “I’ve been called a lot of things in my life. That was a first.”

Clinton doesn’t want to talk about her Wall Street speeches. During the debate, CNN moderator Dana Bash tried to pin down Clinton on why she has so far refused to release the transcripts of paid speeches she gave to Goldman Sachs. “If there’s nothing in those speeches that you think would change voters’ minds,” Bash asked, “why not just release the transcripts and put this whole issue to bed?”

Clinton did everything she could to dance away from answering the question—even after repeated follow-up questions. “There are certain expectations when you run for president,” Clinton said. “This is a new one. And I’ve said, if everybody agrees to do it—because there are speeches for money on the other side [from the Republican candidates]. I know that.” Clinton then tried to change the topic, criticizing Sanders for not yet releasing his tax returns. (Sanders responded by promising to release them soon.)

Not a laughing matter. Throughout the campaign, Clinton has used Sanders’ record of opposing gun control measures to attack him from the left. Thursday’s debate was no different. When the moderators teed up a question for her about Sanders’ stance on the issue, Clinton grew solemn—while Sanders nervously laughed at the question. “It’s not a laughing matter,” Clinton said, sternly rebuking her opponent. “Ninety people on average a day are killed or commit suicide or die in accidents from guns, 33,000 people a year. I take it really seriously because I have spent more time than I care to remember being with people who have lost their loved ones.”

Clinton comes out for a $15 minimum wage, of sorts. While Sanders has been quite clear about his stance on the minimum wage—he wants it to be $15 per hour, nationwide—Clinton has offered a more nuanced take. She’s recently praised places such as New York and California that have bumped up their minimum wage to $15. But last summer, she said she’d rather set the national floor at $12 while allowing individual states and cities to enact higher minimums.

On Thursday, Clinton said she’d be willing to sign a $15 per hour minimum wage bill if Congress passed one—but she also said she’d still initially push for $12. “If you look at it,” she said, “we moved more quickly to $15 in New York City, more deliberately toward $12, $12.50 upstate, then to $15. That is exactly my position. It’s a model for the nation and that’s what I will do as president.”

A tussle over the ’94 crime bill. The 1994 crime bill—signed by Bill Clinton, advocated by Hillary Clinton, and voted for by Sanders—has become a major issue in the current campaign. Two decades after the law passed, critics have faulted it for helping expand the country’s system of mass incarceration. When asked whether she wanted to apologize for the crime bill, Clinton said, “I’m sorry for the consequences that were unintended and that have had a very unfortunate impact on people’s lives.” She also noted that her first speech of the campaign focused on criminal justice reform. “I want white people to recognize that there is systemic racism,” she said. “It’s also in employment, it’s in housing, but it is in the criminal justice system, as well.”

That didn’t seem good enough for Sanders. When the moderators turned to him and asked why he had recently criticized Clinton’s use of the term “superpredator” when the crime bill was debated in the ’90s, Sanders didn’t mince words. “Because it was a racist term, and everybody knew it was a racist term,” Sanders said.

Sanders says supporting Palestinian rights doesn’t make him anti-Israel. Something surprising happened Thursday night: a thoughtful, nuanced discussion of the Israel-Palestinian conflict. The moderators pushed Sanders on whether he stood by his statement that Israel’s military strikes in Gaza in 2014 were “disproportionate.” Sanders didn’t back down, noting his personal relationship to the Jewish state but criticizing how it treats Palestinians. “I believe the United States and the rest of the world have got to work together to help the Palestinian people,” Sanders said. “That does not make me anti-Israel.”