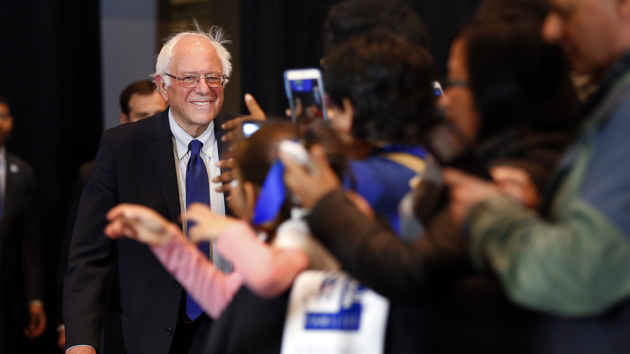 Political pundits scoffed when Sen. Bernie Sanders of Vermont spent last summer on a stadium speaking tour, bypassing the traditional glad-handing at small diners in the early-voting states. He amassed large crowds in cities that wouldn’t vote until deep into the primary contest, when he’d no longer be in contention for the Democratic presidential nomination, or so the thinking went.

Last July, Sanders stopped here in Madison, Wisconsin, and packed an arena with 10,000 ecstatic supporters. The large draw proved that Sanders had a base of support that would propel him to become the top challenger to Hillary Clinton, but he was still dismissed as a rabble-rouser who could attract a college crowd but not pin down votes.

As it turns out, advance planning can pay off. The major networks called the Wisconsin primary for Sanders shortly after polls closed on Tuesday, extending a winning streak that’s given supporters reason to believe that maybe, just maybe, Sanders might have a shot at the nomination. Clinton had the support of nearly all the state’s Democratic leaders, but in the end she couldn’t even compete with Sanders and largely gave up on campaigning in the state over the final days of the primary. She shifted her attention to New York, which doesn’t vote for another two weeks.

Meanwhile, Sanders was whipping up crowds across Wisconsin. On Sunday, he was back in Madison, at the University of Wisconsin’s basketball arena. He couldn’t fill the entire arena this time around, but he still managed to draw 4,400 people—even though he’d just been in town a week prior. He brought in a host of national talent to whip up the crowd: Actors Shailene Woodley and Rosario Dawson spoke, while indie-rock band Best Coast played a short set. But perhaps more telling was a band of local singers, who regularly protest Gov. Scott Walker through song in the state capital and who performed pro-union songs before the national acts on Sunday.

Driving around Madison over the past week, I’ve seen Sanders yard signs on nearly every other block, and walking around campus on Tuesday I ran into numerous Sanders volunteers instructing students confused by the state’s strict photo ID law. Meanwhile, I haven’t run across a single Clinton sign in town; even signs for John Kasich, a long shot for the Republican candidacy, outnumber them. Sanders staked out Dane County—home of Madison—as his territory from the start of the campaign.

Although Sanders’ win is a nice boost to his momentum, adding to a recent string of victories, he still faces long odds to gain the nomination. Unlike the Republican Party, which sometimes awards the full slate of delegates to a single candidate in winner-take-all elections, the Democrats allocate delegates in every state on a proportional basis. So even though Sanders was leading Clinton by a wide margin as early returns came in, he’ll rack up only a few more delegates than Clinton. In order to erase Clinton’s delegate lead, Sanders will need to run up huge margins of victories in the upcoming states with large delegate hauls—New York, Pennsylvania, California—which would require a massive swing in the polls over the next month.

Then again, few people thought he’d be here in the first place.