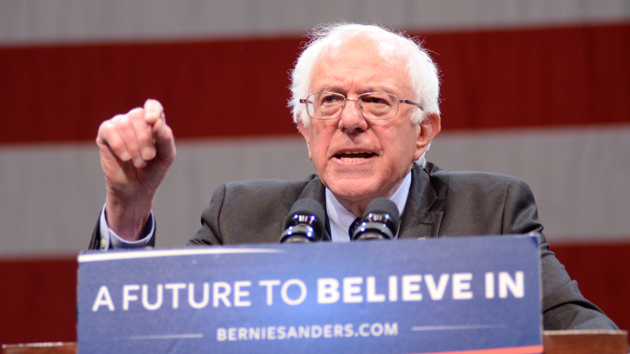 Sen. Bernie Sanders didn’t mince too many words during a campaign stop in Sheboygan, Wisconsin, on Friday afternoon. Midway through his typical stump speech railing against the millionaires and billionaires, he broke off to explicitly contrast himself with Hillary Clinton for her history of taking money from fossil fuel interests and giving highly paid speeches to financial firms, among other topics.

“As many of you may know, Secretary Clinton has given speeches on Wall Street for $225,000 per speech,” Sanders said to boos from his crowd. “You know what I think? If you’re going to give a speech for $225,000, it must be a really fantastic speech, don’t you think? Why else would you get $225,000? It must be written in Shakespearean prose. It must be a speech that solves most, if not all, the problems facing humanity.” Clearly pleased with his quips, Sanders then called for Clinton to share the speech transcripts with the rest of the world.

Sanders ticked off a number of other points of disagreement, lingering after the punchiest statements to allow his supporters time to boo his opponent. Sanders faulted Clinton for associating with a super-PAC, and supporting trade deals that he said harmed Wisconsin manufacturing. He said she couldn’t be trusted on foreign policy, since “she voted for the war in Iraq, the worst foreign policy blunder in the modern history of America.” Nor could she be trusted on the environment. “Secretary Clinton and I disagree on the issue of fracking. It may not seem like a sexy issue, but it is an enormously important issue,” Sanders said, pointing to her record pushing shale gas extraction abroad when she led the State Department.

But his most pointed criticism came when Sanders discussed the hubbub over fossil fuel donations that has enveloped the campaign over the past day. At a campaign event in New York on Thursday, a Greenpeace activist asked Clinton if she’d reject donations from those industries in light of her stance on climate change. “I am so sick of the Sanders campaign lying about me. I’m sick of it,” Clinton responded, visibly angry as she jabbed her finger at the activist and argued that garnering support from individuals who work for fossil fuel companies isn’t the same as being supported by gas and oil companies.

Sanders was having none of that Friday. “Secretary Clinton, you owe our campaign an apology: We were telling the truth,” Sanders sternly said. He pointed to research from Greenpeace that highlights $4.5 million in donations to Clinton’s campaign from people tied to the fossil fuel industry. The figure lumps together contributions to Clinton’s campaign from employees of such companies (some of whom have also donated to Sanders) and donations from lobbyists working for the industry, along with money from individuals tied to fossil fuels that has gone to her super-PAC, Priorities USA. The Clinton campaign has pointed out that, as is legally required, it is not coordinating with the super-PAC, though Clinton and her staff have recruited donors for the organization.