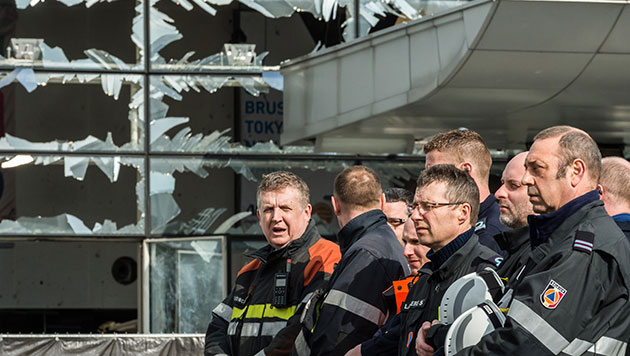 Firefighters and first responders stand next to blown out windows at Zaventem Airport in Brussels.Geert Vanden Wijngaert/AP

Update, March 23, 4:20 p.m. EST: Turkish President Tayyip Erdogan said that one of the attackers was arrested near the Syrian border last June. After he was deported to the Netherlands, Turkey warned Belgium of his suspected ties to terrorist activities. The Guardian is reporting that he was one of the two suicide bombers who carried out the explosion inside Zaventam airport.

Update, March 23, 7:24 a.m. EST: Belgian news agencies have identified two of the bombers in Tuesday’s attacks as brothers Khalid el-Bakraoui, 27, and Ibrahim el-Bakraoui, 30. Both men had been sought by Belgian authorities since the March 15 raid that captured Salah Abdeslam, who is suspected of involvement in the Paris attacks. The Belgian authorities have reportedly arrested a third suspect.

Update, March 22, 1:30 p.m. EST: Belgian police have issued an arrest warrant for a man believed to have participated in carrying out the Brussels attacks. Authorities also released the following photo of three men suspected to be behind the explosions:

Update, March 22, 11:42 a.m. EST: The Islamic State claimed responsibility for the attacks in Brussels, according to an ISIS-related “news agency,” reports the Associated Press. The claim said the attacks were in response to Belgium’s support in the fight against ISIS.

The city of Brussels is under lockdown after multiple explosions rocked its main airport and a subway station early on Tuesday morning.

Authorities believe a suicide bomber carried out the attack at the Zaventam international airport. Another bombing targeted a metro station in the Brussels suburb of Maalbeek. All flights and public transportation have been canceled in the wake of the attacks.

Tuesday’s explosions come just days after Salah Abdeslam, the fugitive who is suspected of carrying out the Paris attacks in November, was shot and arrested in a terror raid in the Belgian capital.

This was the scene a short while ago, between the Arts-Lois and Maelbeek metro stations in Brussels. pic.twitter.com/aTZjqsF7Gt

“I express my complete solidarity with the Belgian people,” French President Francois Hollande said in a press conference. “Terrorists struck Brussels, but it was the whole of Europe that was targeted.”

This is a breaking news post. We will update as new information becomes available.