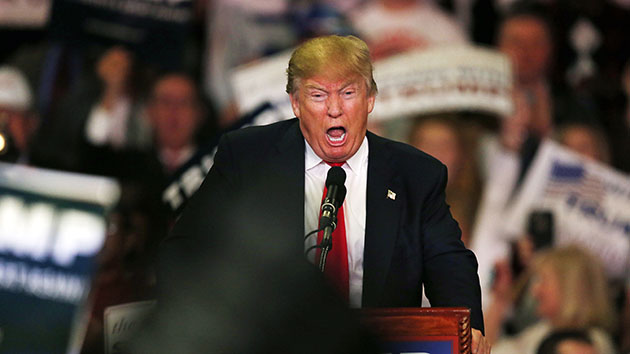 After his wins in the Mississippi and Michigan Republican primary elections on Tuesday night, GOP front-runner Donald Trump delivered rambling remarks in which he touted various Trump products (including Trump Steaks); slammed Mitt Romney, “Lyin’ Ted,” and “Little Marco”; defended Trump University; praised Megyn Kelly (for having said Trump had a good night); vowed to promote the use of “Merry Christmas”; and explained that “hostility works for some people but it doesn’t work for everybody.”

Trump has hardly been a champion of statesmanship or decorum. Through the decades, he has been brash and brazen. He has called Rosie O’Donnell a “dog” and compared having sex in the 1980s to serving in Vietnam. (Both were dangerous.) And recently he became the first presidential candidate to go on television and directly refer to the size of his penis.

Trump has a long history of crude remarks. But perhaps he was at his crudest when in 2009 he participated in a Comedy Central roast of comedian Joan Rivers. He appeared on the broadcast via a video clip. Seated at a desk in an office, Trump delivered the following, uh, tribute to Rivers.

Good evening, America, I am Donald Trump, and I’m not here to tell you roast jokes. Frankly, it’s beneath me. In fact, even doing cable—I only do network. I don’t do this kind of stuff. And I don’t like it. I’m here to announce my greatest, my most ambitious construction project yet: the Joan Rivers Facial and Body Renovation. And that is a big job. My trained eye tells me since 1982 you’ve been condemned from the waist down. And like most dilapidated structures, you haven’t been entered in decades. But I, Donald Trump, promise you no expense will be spared in your reconstruction. We’ll tent you, fumigate you, and, if necessary, send in a hazmat team to remove all hazardous materials found in that toxic pool you call a vagina. Which has already been responsible for at least one fatality. Trump Rivers will be one of my biggest projects ever. But Donald Trump is up to the challenge to make you, what we in real estate business call [bleep] friendly.

The word bleeped out seemed to be “dick.”

If you really want to watch: