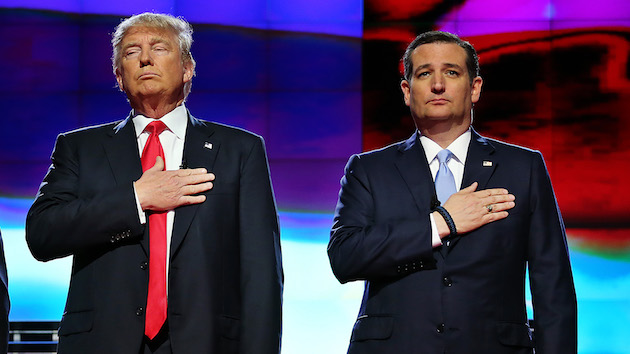 Trash-talking about wives, naked photos, a campaign manager arrested for assault, charges of marital infidelity—the Republican presidential campaign face-off between Donald Trump and Ted Cruz has become a circus. No, wait—that’s not fair to circuses, where the action is orderly and designed with precision to entertain children and prompt joyful smiles and gasps of delight and astonishment at the G-rated feats. After all, trapeze artists do not take the low road. The GOP contest is more of a mud-wrestling match in which all observers are dirtied up by the flying dreck. So in the middle of this splatter-fest, let’s take a moment to discuss a matter just as exciting as Melania Trump’s handcuffs: tax policy.

Okay, perhaps it’s not as exciting as that, but it’s a wee bit more important.

As Trump and Cruz slug it out for the Republican prize, each aims to distinguish himself from the other. Trump says he’s a truth-teller and—BAM!—Cruz is “Lyin’ Ted.” Cruz claims he’s a principled and courageous conservative and—KA-POW!—Trump is a “sniveling coward” and rank opportunist. But there’s not been much notice paid to a topic on which they have much in common. Both have released tax plans that would cut taxes for the well-to-do (be they billionaire real estate developers or investment bank partners) and force the government to slash programs benefiting poor and middle-class Americans.

While many of us have been fixated on the catty drama of Real Candidates of the Republican Party, the number-crunchers and policy wonks at the Center on Budget and Policy Priorities have taken it upon themselves to do the tough work of focusing on actual substance. And what they have found isn’t any prettier than the superficial back-and-forth of the race. Here’s their summary:

The tax-cut proposals from Republican presidential candidates Donald Trump and Ted Cruz, in conjunction with their calls for balancing the budget, would dictate low levels of government spending not seen since about 1950. Programs that receive support across the political spectrum and are important to the well-being of most Americans would dramatically shrink or disappear altogether. Even if policymakers did not achieve budget balance under their tax-cut plans but simply offset the costs of the plans themselves, the consequences to essential programs—and to low- and middle-income American—would be severe.

Apparently, if either of these guys snags the Republican nomination and proceeds to claim the White House, America won’t be so great again for millions of its citizens.

Here’s the breakdown: The CBPP first took the Tax Policy Center’s estimates of how far tax revenue would fall if Trump’s or Cruz’s plan were implemented. For Trump’s proposal, the figure is $9.5 trillion over 10 years; for Cruz’s, $8.7 trillion. This would place revenues as a percentage of the national GDP in the range of what they were in 1950—before Medicare existed and when Social Security claimed only 0.3 percent of gross domestic product. (Today, Social Security and Medicare account for 8.1 percent of GDP, and this amount is on the rise, thanks to those aging baby boomers.)

Numbers! I know—by now you’re wondering, Hey, has Donald Trump tweeted anything in the past 20 minutes? But let’s bravely trek on. The CBPP examined what would happen with this loss in tax revenues. After all, if you reduce revenues—and if you’re not willing to turn the federal deficit into an exploding supernova—you have to cut spending. So how much will have to be cut? According to the CBPP, if Trump or Cruz is going to reduce taxes and balance the budget by 2026—and they both vow to bring the US government into the black—all government programs would have to be cut by 40 percent. That includes Social Security, Medicare, and the military. If Trump and Cruz don’t want to eviscerate Social Security, Medicare, and the military, there is another option: eliminating the rest of the US government. That’s right, simply get rid of it all: the Environmental Protection Agency, the Centers for Disease Control and Prevention, infrastructure, law enforcement, cancer research, food stamps, Medicaid, immigration enforcement, NASA, you name it.

It’s even worse than that. As the CBPP notes:

As dramatic as these figures are, they understate the pressure that the two candidates’ proposals would place on many government programs. Both have proposed large spending increases in certain areas, including Senator Cruz’s proposal to increase defense spending by $2.7 trillion over the next decade and Mr. Trump’s proposal to increase spending on veterans by $500 billion to $1 trillion over this period. Offsetting the cost of such increases, as well as the tax cuts, would require even deeper cuts to other programs.

If, for some reason, a President Trump or President Cruz elected not to offset the lower revenues with draconian (and unreasonable) program cuts, the national debt would jump to more than 120 percent of the GDP in 10 years. (It is now about 75 percent of GDP.) How’s that for conservative governance?

Of course, tax-cutters always claim tax cuts can boost economic growth and pay for themselves because greater economic activity will yield more tax revenue. But the CBPP and others have demonstrated that this is generally not the case and certainly not a notion to bank on.

Yet won’t these tax breaks help hard-pressed Americans? Yes, if by that you mean Americans hard-pressed to buy a fourth or fifth vacation home. The Tax Policy Center has estimated that the wealthiest 1 percent of taxpayers would pocket about two-fifths of the benefits from Trump’s plan and collect about half the benefits from Cruz’s proposal. The middle 20 percent would claim about 11 percent of the gains from Trump’s plan and 6 percent from Cruz’s. Here’s the bottom line, as the CBPP puts it: “Dramatic reductions to much of government—which would have sweeping, adverse implications for most low- and middle-income Americans—would occur to offset tax cuts that primarily benefit the wealthiest among us.”

Trump calls for cutting taxes at every income level, replacing the current seven brackets ranging from 10 to 39.6 percent with three brackets of 10 percent, 20 percent, and 25 percent, with the well-heeled receiving the largest break. Cruz has proposed a flat rate of 10 percent and a new broad-based consumption tax of 16 percent. These are very different approaches, but as the CBPP and the Tax Policy Center have found, they result in a similar outcome: The wealthy will pay a lot less, the deficit will expand, and there will be pressure to decimate government programs. For sure, the prospect of drastically slashed cancer research, Pell grants, and counterterrorism funding is not as sexy a campaign issue as hot pics of a potential first lady. But it’s worth a nanosecond or two of campaign coverage. It may often seem as if Trump and Cruz are running for ringmaster. Yet what they want to do to the nation is nothing to laugh about.