The Little Sisters of the Poor were the perfect plaintiffs. When religious legal groups were looking to challenge President Barack Obama’s signature law, the Affordable Care Act, and its mandate that employers’ insurance plans cover contraception for free, they turned to the order of elderly nuns to help make the case that the law was unconstitutional. The sisters, a group of humble, chaste—not to mention old—women who had dedicated their lives to serving the elderly, were the ideal foil to Obama’s contraceptive mandate. After all, who could need mandatory contraceptive coverage less than a bunch of old virgins? 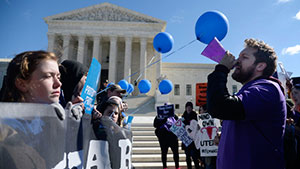 10 Things You Should Know About This Supreme Court Case

A religious order with about 2,300 members in the United States, the Little Sisters started in France in 1839 when Saint Jeanne Jugan brought home an elderly, blind woman whom she found in the street and put her in her own bed. That demonstration of hospitality eventually led to the creation of the order, which has a tradition of begging to support its mission of caring for the elderly poor. The sisters even had sole permission to beg in US federal office buildings until the terrorist attacks of 9/11 put an end to it.

But in truth, there is no perfect plaintiff, and nuns are no exception. For as much as their chastity was supposed to embarrass the Obama administration for trying to force nuns to provide contraceptive coverage, it turns out that sometimes even nuns need birth control.

After all, birth control pills are prescribed for a wide variety of health problems, such as irregular menstrual bleeding, that have nothing to do with preventing pregnancy—and many of these health problems are widespread among older women, including nuns. Beyond the practical health care applications of contraception, birth control also does prevent unwanted pregnancies. And, in rare occasions, religious women require this as well.

For as much as their chastity was supposed to embarrass the Obama administration, it turns out that sometimes even nuns need birth control.

Just as there is no perfect plaintiff, there is no perfect case, and the Little Sisters of the Poor also fit that category. Their legal saga began in September 2013, when a group of Little Sisters in Denver filed suit against the Obama administration. The nuns had objected to the US Department of Health and Human Services regulation that required them to provide all the religious and lay employees of their elderly residential home with free contraceptive coverage through their insurance plan. The administration had provided for an exemption to the rule for religious nonprofits. All the nuns had to do to avoid the contraceptive mandate was fill out some forms and let the government know of their religious objection, and the government would arrange for third parties to provide the contraceptive coverage. Failing to file the paperwork and also failing to provide the contraceptive coverage, though, would subject the nuns to heavy fines.

The nuns sued, asserting that even filling out the paperwork to claim a religious accommodation would compromise them by involving them in the immoral practice of facilitating access to contraception for their employees, many of whom are laypeople. In 2013, both the US District Court for the District of Colorado and the 10th Circuit Court of Appeals denied their request for relief, on the grounds that submitting some paperwork wasn’t a substantial burden on their religious freedom, so they filed an emergency appeal with the US Supreme Court, specifically with Justice Sonia Sotomayor, who oversees the 10th Circuit for the high court. Sotomayor granted the emergency injunction so the nuns wouldn’t have to pay the fines while the case wended its way to the full court.

The timing was a bit awkward. Scarcely a month after the nuns filed suit, on October 5, 2013, a 26-year-old Little Sisters of the Poor postulant, Sosefina Amoa, arrived in Washington, DC, from Samoa to begin her studies at the Jeanne Jugan residence across the street from the Catholic University of America. Five days later, she gave birth to a full-term, six-pound baby boy. Fearing discovery, she smothered the baby under a black wool garment to hide his cries. She apparently contemplated putting the baby in the trash, but after sitting with the body for a day, she confessed to another nun, and they took the infant’s body to the hospital in a suitcase. The police arrested Amoa and charged her with first-degree murder.

Amoa told the police she hadn’t known she was pregnant, and that when she’d started bleeding on October 9 she’d thought it was simply her normal menstrual period. In May 2014, she pleaded guilty to voluntary manslaughter and was sentenced to four years in prison. After Amoa pleaded guilty, Sister Loraine Marie, a provincial superior for Little Sisters of the Poor, released a statement calling the episode “profoundly sorrowful.”

By then, a host of other religious organizations had also sued over the notification provision, and six out of seven lower courts hearing those cases have ruled against the religious groups, finding that filing some paperwork does not constitute an undue burden on religious freedom, especially when weighed against the very real health considerations of women who would benefit from free contraceptive coverage. The Supreme Court will hear oral arguments in those cases, collectively known as Zubik v. Burwell, on Wednesday.

The nuns and other religious groups have gathered many sympathizers on their way to the Supreme Court, but the only one who may ultimately matter is Justice Samuel Alito, a Catholic jurist who has been extremely responsive to claims of religious freedom violations since he joined the court in 2006. Alito is the author of the controversial decision in Hobby Lobby v. Burwell, which allowed a for-profit, privately held company to avoid complying with the contraceptive mandate because of a religious objection. The Zubik case is a direct sequel to Hobby Lobby. Based on that opinion, Alito might seem an obvious candidate to vote in the nuns favor.

In Hobby Lobby, Alito specifically tried to tamp down the inevitable outrage over his decision by pointing to the religious accommodations the Obama administration has carved out for groups just like the Little Sisters—accommodations that he indicated should be applied to for-profits like Hobby Lobby. Alito wrote that the accommodation was the reason why the impact of the Hobby Lobby decision on women would be “precisely zero.” Hobby Lobby (and, by extension, the nuns) could simply opt-out of the mandate without compromising their religious beliefs, Alito suggested, because the government would take care of the contraceptive coverage for their employees. The women employed by those organizations, he wrote, would still be entitled to “all FDA-approved contraceptives without cost sharing.”

Justice Ruth Bader Ginsburg took issue with Alito’s assessment that Hobby Lobby wouldn’t have much of an impact on the real world; in her dissent in that case, she noted that “the court, I fear, has ventured into a minefield.” Yet Alito was essentially right that the ruling would not affect a women’s ability to access birth control—so long as the accommodation available to the Little Sisters remains in force. But if the court rules that religious nonprofits can both ignore the contraceptive mandate and refuse to allow their employees access to the third-party contraceptive coverage on religious grounds, then women employed by those organizations will be severely disadvantaged.

The Zubik case will determine if Alito was really serious about his effort to balance religious freedom with women’s health. If he is, the nuns are probably going to lose. But if Alito ignores his promises of zero impact in Hobby Lobby, and if he votes to gut the contraceptive mandate in Zubik, the court could end up with a tied vote. And then, whether or not a woman who works for a religious nonprofit has access to affordable contraception will depend entirely on how the federal appellate court in her region ruled on the issue.

Because of the unexpected February death of Justice Anton Scalia, the Supreme Court is now evenly split 4-to-4, liberal to conservative. If the high court ends up tied in Zubik, the rulings of the various lower courts on the issue will stand. So women working for religious nonprofits who live in the areas covered by the * eight appellate courts that ruled in favor of the Obama administration will have access to free birth control. Those who live in the 8th Circuit region—states like Missouri, Iowa, and Minnesota—will not. And this disparity won’t be definitively resolved until the Senate finally confirms a ninth member to the court.

Correction: An earlier version of this article misstated the number of federal appellate courts that have ruled in favor of the government in religious accommodation challenges to the contraceptive mandate. The number is eight, not six, as previously stated.