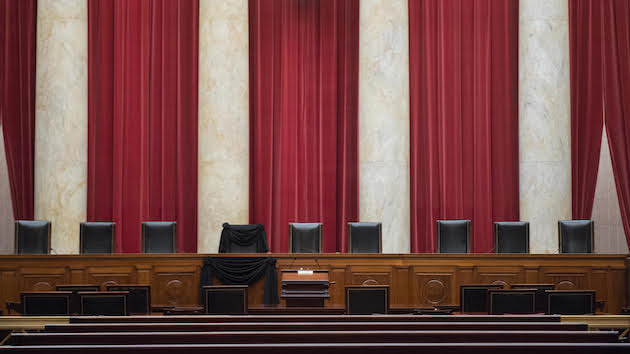 Supreme Court Justice Antonin Scalia’s bench chair and the bench in front of his seat are draped in black on February 16, following his death on February 13. <a href="">Bill Clark</a>/CQ Roll Call via AP Images

President Barack Obama is said to have narrowed to three candidates his list of potential Supreme Court nominees to fill the seat of the late Justice Antonin Scalia: 9thCircuit Court of Appeals Judge Paul Watford, DC Circuit Judge Sri Srinivasan, and Merrick Garland, the chief judge of the DC Circuit. The question is which one of them is willing to become this year’s political sacrificial lamb.

Even if Obama manages to persuade the Senate to hold a hearing on his nominee, the GOP-controlled chamber isn’t likely to confirm anyone. The process will be brutal, without even offering the promise of attaining a seat on the high court. As Sen. John Cornyn (R-Texas) said last week, Obama’s nominee, whoever he or she is, will “bear some resemblance to a piñata.” In short, this year’s brawl over the Supreme Court centers around just about everything except how best to fill an empty seat on the court.

Republicans have a 10-vote edge in the Senate, and they have routinely demonstrated their ability to unite to obstruct Obama. Senate Republicans have barely confirmed Obama’s lower-court appointees, at the risk of creating a judicial emergency due to unfilled seats. In 2013, Senate Judiciary Committee Chairman Charles Grassley went so far as to try to eliminate three seats on the DC Circuit Court of Appeals simply to deny Obama the opportunity to fill them.

Obama last nominated a Supreme Court justice in 2010, when he tapped former Solicitor General Elena Kagan to replace retiring Justice John Paul Stevens. Kagan should have sailed through the process. She’d never been a judge, but she had argued cases before the Supreme Court, and she had a strong legal academic background. This was not so different from Scalia, who had spent many years as a law professor.

Nothing about her was controversial, despite Republican efforts to find something. (Remember those softball photos—which some partisans pointed to as a suggestion she was a closeted lesbian?) Even so, Kagan was confirmed 63-to-37, with only five Republican votes. By comparison, in 2005, the Senate confirmed Chief Justice John Roberts Jr. by a vote of 78-to-22. Democrats were in the minority then, yet 22 of them voted for Roberts.

Of those five moderate GOP senators who voted for Kagan, only two remain in the Senate today: Sens. Lindsey Graham of South Carolina and Susan Collins of Maine. And unlike in 2010, Republicans now tightly control the Senate with a solid majority. A few Republican senators might feel compelled to allow Obama a hearing on his nominee. But there is no indication that any Republican senator will vote to confirm that person.

So why is Obama bothering to nominate someone? Politics, of course. Forcing Republicans to vote against an attractive Supreme Court nominee could make Republicans look like unreasonable obstructionists in an election year. The issue of the Supreme Court can be a potent one in the presidential election and in certain Senate races. The Democrats need to win at least five seats to take back the Senate, and Democratic strategists believe that GOP intransigence can be used to target several incumbent Republicans.

But before a nomination battle can commence, there must be a nominee. Yet who wants to volunteer for this punishing and likely futile role? The nominee will have to endure a grueling process that could make Clarence Thomas’ controversial hearings look civil. And at the end of all the torture, that person will probably be condemned to the Robert Bork club, that small but elite group of people whose names will perpetually be preceded by “failed Supreme Court nominee.”

Garland—if he’s willing to be a martyr—would make a good candidate. His judicial qualifications are stellar. Currently the chief judge of the US Court of Appeals for the DC Circuit, he clerked for liberal Supreme Court Justice William Brennan, prosecuted the Unabomber at the Justice Department, and had an impressive private-sector legal career. He’s also well qualified to serve as a sacrificial lamb.

In a normal political year, he might not be at the top list. As a white man, he would bring no diversity to the court. And, because the Supreme Court is a lifetime appointment, Garland would typically be passed over because he’s too old. At 63, he’s two years older than Roberts, who’s been on the court for a decade. With justices hanging on to their seats well into their 90s, presidents from both parties have an incentive to choose relatively young candidates for the job.

Obama passed over Garland for a Supreme Court vacancy in 2009, instead choosing Sonia Sotomayor, the court’s first Latina justice. But Garland now fits all the right criteria for a nomination destined to fail. Because his credentials are so impeccable and because he’s apolitical and noncontroversial, he’ll serve as a perfect foil to GOP senators, who wouldn’t look too good shooting down this perfectly reasonable nomination. And losing the nomination fight won’t ruin Garland’s life. He has a lifetime appointment to the top post at the most important federal appellate court in the country. And he’s had a successful career that’s not likely to be marred much by landing in the Bork camp.

That’s not necessarily the case for Garland’s fellow short-listers, who are younger and from minority backgrounds. Watford, who is African American, is 48. His most notable appellate decision cracked down on illegal searches by Los Angeles cops. Srinivasan is 49 and Indian American. Imagine him trying to explain his Hindu religious background to someone like Sen. Jeff Sessions (R-Ala.). Sessions is the ranking GOP member of the Senate Judiciary Committee and the first senator to endorse GOP presidential candidate Donald Trump. (Sessions, whose 1986 nomination to the US District Court in Alabama was scuttled because of allegations of racism, once famously joked that he thought the Ku Klux Klan was “okay until I found out they smoked pot.”)

The experience of the last minority Supreme Court nominee suggests what could be in store for a candidate like Watford or Srinivasan. Republicans and right-wing activists called Sotomayor an affirmative-action nominee, while also attacking her as a racist for talking about her life experience as a Latina. She was accused of not having the intellectual heft for the job, though she had the same academic credentials as Justice Samuel Alito. Commentator Pat Buchannan claimed Sotomayor’s career indicated a “lifelong resolve to discriminate against white males.” One group accused her of supporting violent, anti-American Puerto Rican terrorists. That nomination fight might seem downright tame compared with what lies in store for this year’s nominee, in the era of Trump and post-tea-party politics.

Liberal activists claim that an Obama nominee wouldn’t end up like Robert Bork, in large part because they don’t anticipate the full Senate voting on any nominee—another indication of the extent to which any nomination hearing is going to be pure political theater. They suggest an Obama nominee could be renominated in a Democratic administration. But the odds are high that after going through the confirmation process this year, the nominee could come away as damaged goods—and not to want to do it again.

Whomever Obama persuades to be the nominee will have to know that he or she is taking one for the team. And from all the people currently on that short list, Garland seems like the only one positioned to take the incoming fire and emerge generally unscathed.