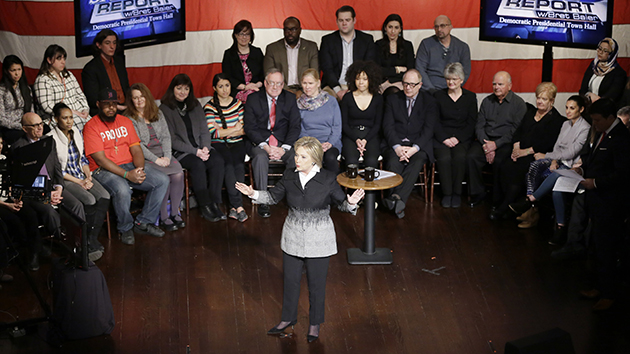 On Thursday, my colleague Kevin Drum made the case that the antipathy many millennials feel toward Hillary Clinton may be a result of her inability to deliver a clear and straightforward statement of her positions on major policy areas. Whereas Bernie Sanders offers unequivocal yes-or-no answers in interviews and debates, Clinton often launches into meandering responses that give the impression—rightfully or not—that she is either hedging or being dishonest.

On one issue in particular, the difference between Sanders’ unmistakable stance and Clinton’s qualified one is becoming increasingly apparent—and it’s an issue that’s as close to a litmus test for Democratic voters as any: abortion.

During a Fox News town hall on Monday night, Clinton and Sanders were asked about their position on late-term abortions. Sanders’ stance was easy to discern: He opposes abortion restrictions, full stop. Clinton’s answer was murkier. She began her response to moderator Bret Baier with a broad defense of a woman’s right to an abortion, mentioning the current Supreme Court case involving Texas’ anti-abortion regulations and the continued Republican attacks on Planned Parenthood. But Baier persisted on the matter of late-term abortions, asking, “Just to be clear, there’s no—without any exceptions?”

Clinton replied, “No—I have been on record in favor of a late-pregnancy regulation that would have exceptions for the life and health of the mother.”

In the exchange, Clinton seems to support limited bans on late-term abortions after a fetus is viable (about 24 weeks into a pregnancy). Her campaign has said nothing to contradict this. Asked to clarify Clinton’s position, a campaign spokesperson responded in an email:

Politicians should not interfere with a woman’s personal medical decisions, which should be left to a woman in consultation with her doctor.

She also recognizes that Roe v. Wade provides that restrictions are constitutional later in pregnancy so long as there are clear exceptions for the life and health of the woman.

Clinton has consistently made clear her support for exceptions to any late-term abortion regulations, such as when the life or mental or physical health of the mother is at risk. She would also consider restrictions only after about the 24-week mark, when a fetus is considered viable, in keeping with the Supreme Court’s ruling in Roe v. Wade.

But her stance leaves open the question of whether a woman’s right to an abortion would be protected if a fetal abnormality is detected late in her pregnancy that does not threaten her life or health. This issue may not be the highest priority for abortion rights advocates who have battled more fundamental threats to abortion access in recent years. Only a small fraction of abortions take place after 20 weeks. But in a primary campaign that has seen the candidates and their backers parse the slightest differences in their platforms, the late-term abortion debate represents a meaningful divide between Clinton and Sanders on a high-profile issue.

Clinton’s comments on Monday were largely in line with statements she has made over the years supporting bans, with exceptions, on late-term abortions. Last month, PolitiFact reviewed Clinton’s statements on late-term abortions over the years and concluded, “Clinton does not believe that all abortion should be legal. Instead, she’s said she supports restrictions on late-term abortions except in cases of rape, incest and when the mother’s life and health are in danger.” This would mean that despite being the nominee endorsed by the nation’s leading pro-choice groups, she is more open to abortion regulation than Sanders.

The pro-choice groups that have rallied behind Clinton do not believe that her town hall remarks, or any other comments she has made, are a black mark on her record of support for abortion rights. In statements to Mother Jones, both NARAL Pro-Choice America and the Planned Parenthood Action Fund stressed that Clinton’s broader comments spoke to their most pressing concerns, including 20-week abortion bans they believe violate the Constitution and the legal battle in Texas, where they say Republicans are trying to regulate abortion out of existence. “Women in some parts of Texas must drive hundreds of miles or cross state lines to receive care, and in four states there is one health center that offers abortion,” said Dana Singiser, vice president of public policy and government affairs for the Planned Parenthood Action Fund. “Hillary Clinton rightly understands these threats to access as the most urgent issue in the discussion around abortion.”

“Hillary Clinton has been a steadfast champion for reproductive freedom, and on Monday she used her platform to proactively address the crisis in abortion access facing millions of Americans,” said James Owens, a spokesman for NARAL. “She also reiterated her pledge to defend the constitutional protections for abortion rights enshrined in Roe and to stand up to the ongoing attempts to limit and constrain these rights.”

Amanda Marcotte, who writes about feminism and politics, argues in Salon that Clinton and Sanders have essentially the same abortion stance. “The truth is that there’s no real difference between Sanders and Clinton on abortion rights,” she states. “Like Clinton, Sanders invokes Roe v Wade as ‘the law of the land’, suggesting that he has the same support that Clinton has for Roe’s allowance for restrictions in the third trimester.” But Sanders explicitly told Baier he would not support any restrictions on abortion—a more categorical stance than Clinton’s.

Seeking more clarity on Clinton’s position, Mother Jones followed up with her campaign, asking, “[I]f Congress passed a ban on post-viability abortions that included the exceptions that Clinton requires, including life and health of the mother, would she sign it?” The campaign didn’t respond.