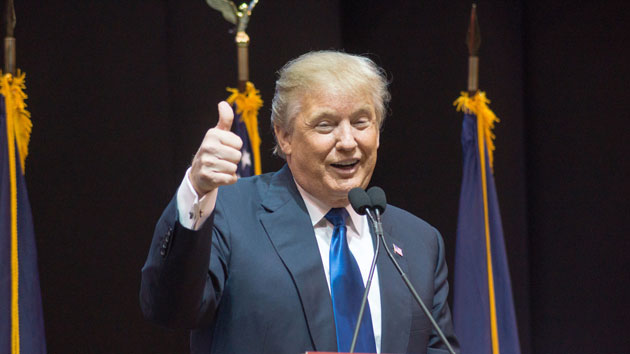 Donald Trump told a Wisconsin town hall on Wednesday that his proposed ban on Muslims entering the United States would have an exception for the billionaire’s rich friends.

“I have actually—believe it or not—I have a lot of friends that are Muslim and they call me,” Trump said, when asked about his plan by MSNBC’s Chris Matthews, the event’s moderator. “In most cases, they’re very rich Muslims, okay?”

Matthews then asked Trump if his rich Muslim friends would be able enter the country under Trump’s Muslim ban. “They’ll come in,” Trump said. “You’ll have exceptions.”

But he didn’t stop there. A few moments later, when Matthews suggested a blanket ban might rub Muslims the wrong way, Trump flipped the script, arguing that it would instead have a galvanizing effect on Middle Eastern countries in the fight against ISIS.

“Maybe they’ll be more disposed to fight ISIS,” Trump said. “Maybe they’ll say, ‘We want to come back into America, we’ve got to solve this problem!'”

Yet another idea from @realDonaldTrump that’s ignorant, reckless, and frankly absurd. Sad! https://t.co/XMf8Z3CAUR

If you are one of Trump’s rich Muslim friends, Mother Jones would love to speak with you. Shoot me an email at tmurphy@motherjones.com.