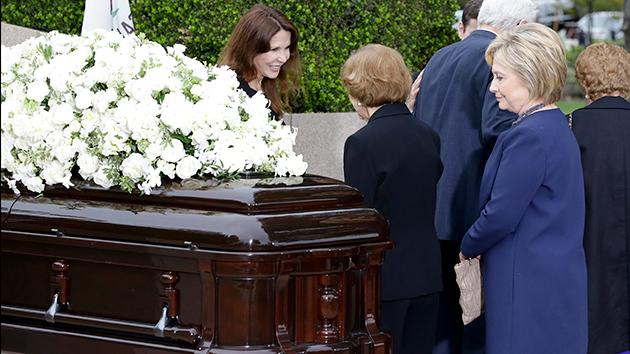 After praising the late Nancy Reagan for starting “a national conversation” on HIV and AIDS, then promptly apologizing in the face of intense criticism on Friday, Hillary Clinton has now issued a much longer explanation and apology, posted to Medium on Saturday night.

“To be clear, the Reagans did not start a national conversation about HIV and AIDS,” she wrote. “That distinction belongs to generations of brave lesbian, gay, bisexual, and transgender people, along with straight allies, who started not just a conversation but a movement that continues to this day.”

Clinton faced a backlash on social media, and from bewildered gay rights activists, who universally condemned Clinton’s statements as wrong and revisionist. “Nancy Reagan was, sadly, no hero in the fight against H.I.V./AIDS,” wrote Chad Griffin, the head of the largest gay rights group in the country, Human Rights Campaign. The Reagan administration is widely seen as having dangerously dragged its feet on AIDS, while thousands of Americans died.

Just hours after she made the remarks at Nancy Reagan’s funeral in Simi Valley, California, Clinton posted to Twitter that she “misspoke” about Reagan’s record on HIV and AIDS: “For that, I am sorry.” But on Saturday, the hashtag #HistoryByHillary began trending, mocking, among other things, Clinton’s version of this crucial part of AIDS history.

Some advocates were more forgiving than others. “There’s no question that under the Reagan administration there was a complete failure to deal with this issue,” said Michael Kaplan, the president and CEO of AIDS United, a DC-based advocacy organization, in an interview with Mother Jones. But, he pointed out, “people get swept away in the moment. She’s there at a fellow first lady’s funeral, and grasping for things to say.”

In her blog post, which amounts to more than a simple mea culpa, Clinton lays out more clearly the historical events as they occurred in the early days of AIDS activism, darkly familiar to those who survived the disease’s onslaught. Activists, she wrote, “organized and marched, held die-ins on the steps of city halls and vigils in the streets. Their courage—and their refusal to accept silence as the status quo—saved lives.”

Pledging to do more to fight HIV, Clinton mentioned a range of policy proposals in her blog post, largely ones she’s already made, including clamping down on price gouging for AIDS medicines, capping out-of-pocket expenses, calling on Republican Governors to extend Medicaid, and expanding access to PrEP, the drug that can effectively limit the spread of the disease.

Referring to victims and survivors of the disease, Clinton wrote: “We owe it to them and to future generations to continue that fight together. For the first time, an AIDS-free generation is in sight”—repeating a vision she outlined in 2012’s “blueprint” for the Obama administration’s efforts to fight AIDS globally. “Hillary was a key part of that,” Kaplan said—praising her efforts as Secretary of State to broaden the fight against AIDS, here and abroad.

Talking about Clinton’s role in the struggle against AIDS more generally, Kaplan praised her “clarity, from the global point of view.”

.@HillaryClinton used this moment to reignite a national conversation about reaching an AIDS-free generation. https://t.co/rV9C89yxkg