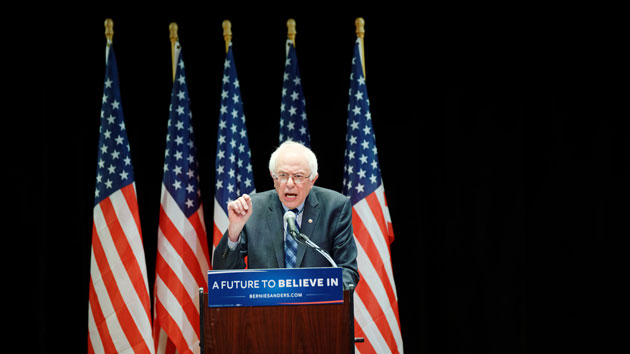 On Monday, Bernie Sanders did something his campaign has been toying with for months: He gave a speech laying out his vision for Middle East peace. With the other four remaining major party candidates traveling to Washington, DC, to speak at the American Israel Public Affairs Committee conference, Sanders opted to stay in Utah, where he is banking on a strong showing in Tuesday’s Democratic caucus. Prior to addressing a packed Salt Lake City gymnasium, he spoke to a smaller crowd, offering the speech his people say he would have delivered at AIPAC.

“A lasting a peace will have to recognize Palestinians are entitled to control their own lives, and there is nothing human life needs more than water.”

Consistent with his ongoing critique of economic inequality, Sanders, who is Jewish and spent time at a kibbutz after college, offered a plea for a more humane handling of the Israel–Palestine conflict. “To be successful, we have to be a friend not only to Israel, but to the Palestinian people, where in Gaza, they suffer from an unemployment rate of 44 percent—the highest in the world—and a poverty rate nearly equal to that,” Sanders said, according to a prepared text of his remarks.

Israel, he argued, is compounding the suffering with its own aggressive policies. Sanders called on Israeli Prime Minister Bibi Netanyahu to pull back settlements in the West Bank and turn over hundreds of millions of shekels in tax revenue to Palestinians. Peace, he also said, “will mean a sustainable and equitable distribution of precious water resources so that Israel and Palestine can both thrive as neighbors…Right now, Israel controls 80 percent of the water reserves in the West Bank. Inadequate water supply has contributed to the degradation and desertification of Palestinian land. A lasting a peace will have to recognize Palestinians are entitled to control their own lives, and there is nothing human life needs more than water.”

As he moved on to a rehashing of his positions on ISIS and the Iran nuclear deal, Sanders hit on familiar themes, framing the failure of Middle Eastern nations to stop ISIS, in part, as a failure of wealthy elites. If Qatar could spend $200 billion on World Cup soccer stadiums, he said, it could surely spend as much fighting terrorists. Singling out Kuwait and Saudi Arabia, both of which have benefited from America’s defense budget, Sanders added that, “wealthy and powerful nations in the region can no longer expect the United States to do their work for them.”

“It is easy to use a war to remove a tyrant from power—but it is much more difficult to prevent total chaos afterward.”

Last November, Sanders talked about his plans to fight ISIS as part of a larger policy speech on democratic socialism, but after initially hinting that a major foreign policy address would follow, his campaign backed down. During debates, he’s often pivoted away from foreign policy to focus on domestic issues. But national security is one area where the differences between he and Hillary Clinton—and for that matter, the entire Republican field—are stark. Although he never mentioned Clinton by name, he acknowledged his Democratic rival in passing by taking a shot at one of their biggest areas of disagreement, military interventions.

“It is easy to use a war to remove a tyrant from power—but it is much more difficult to prevent total chaos afterward,” Sanders said. “Just look at the cost we have paid in Iraq—a war I was proud to oppose. Just look at the chaos in Libya. It is my firm belief that the test of a great nation, with the most powerful military on Earth, is not how many wars we can engage in, but how we can use our strength to resolve international conflicts in a peaceful way.”

You can read his speech here.