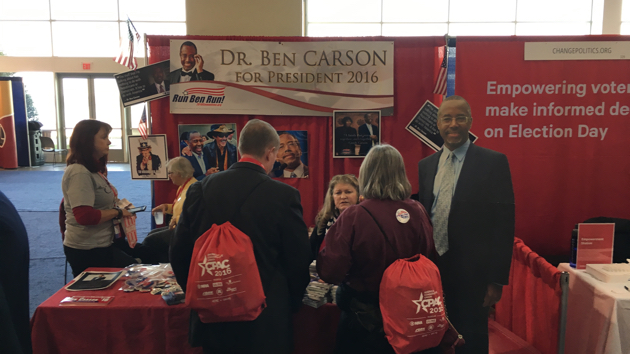 A cardboard cutout of Carson smiles down on the 2016 Committee booth at CPAC.Patrick Caldwell/Mother Jones

Ben Carson’s presidential campaign may be nearing its end, but don’t tell his biggest fans, who are still out in force at the Conservative Political Action Conference, the annual confab just outside Washington, DC.

On Wednesday, Carson announced that he’d be skipping Thursday’s Republican debate and that he didn’t “see a political path forward in light of last evening’s Super Tuesday primary results.” He promised more news at his CPAC speech scheduled for Friday afternoon.

But in the basement exhibition hall at the Gaylord National Harbor Hotel, Beth Trivett was still handing out Ben Carson 2016 car decals and “I Like Ben” buttons. Trivett was manning the booth for the 2016 Committee, the main super-PAC backing Carson’s campaign. “The brilliant doctor generally has a plan,” Trivett told me when I asked if it was dispiriting to be campaigning for Carson right before he likely ends his presidential run.

Still, while upbeat about Carson in general, Trivett didn’t have nice things to say about the shape the presidential race had taken this year. “We all saw the media and parties literally lynch this brilliant man,” she said, pointing over her shoulder to a cardboard cutout of Carson.

There’s already been some talk that Carson could try his hand at another political run—perhaps for Marco Rubio’s Senate seat in Florida. But Trivett, who was working with the group before Carson even entered the race, wasn’t sold on that idea. “We drafted him specifically to be the president,” Trivett said. “This was for POTUS. POTUS is still my preference.”