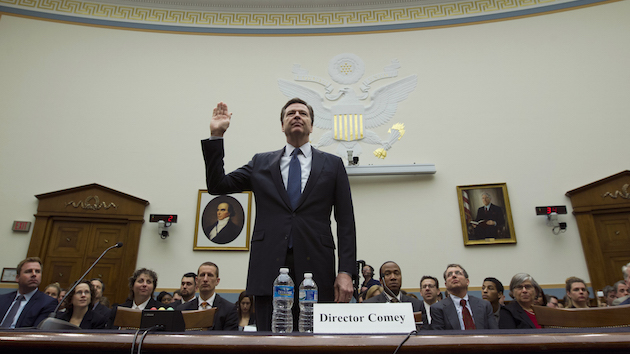 FBI Director James Comey has answered congressional questions about his fight with tech companies over access to encrypted devices and messages in the past. But rarely has he endured the kind of inquisition he faced on Tuesday afternoon before the House Judiciary Committee.

The hearing was the first time Congress focused solely on the fight between the federal government and Apple since they locked horns two weeks ago over the FBI’s request for help in unlocking an iPhone used by Syed Farook, one of the San Bernardino shooters. The FBI is demanding Apple write new software to help the bureau figure out the phone’s password, a step it says is necessary to recover potentially key information about the San Bernardino attack. Apple says the demand is an overreach that would give the government the power to order nearly any information it wanted from private companies or citizens. A federal judge in Los Angeles ordered Apple to comply, but Apple filed a motion last week to vacate that order.

The members of the committee seemed to largely agree with Apple’s position. “Encryption is a good thing. It prevents crime. It prevents terrorism. It keeps our valuable information safe,” said committee chairman Bob Goodlatte (R-Va.) at the start of the hearing. He and other members of the committee then peppered Comey with questions on issues he had so far avoided addressing directly, asking in particular what precedent the San Bernardino case might set for other cases involving locked iPhones.

Comey has previously argued that the San Bernardino case “isn’t about trying to set a precedent or send any kind of message,” and that the FBI was only seeking access to one specific phone. But Comey admitted last week at a House Intelligence Committee hearing that the ruling in the San Bernardino case “would be instructive to other courts.” But he went further under repeated questioning from Goodlatte, ranking Democrat John Conyers (D-Mich.), and other committee members.

“Of course it’ll be looked [at] by other judges and other litigants,” Comey said on Thursday. He confirmed that if the FBI won the San Bernardino case it would then seek similar powers in other cases involving locked phones and other devices.

Conyers also suggested that law enforcement may be exploiting the San Bernardino attacks to push for expanded powers. He mentioned a letter written in August by Robert S. Litt, the top lawyer in the Office of the Director of National Intelligence, in which Litt suggested that intelligence agencies could use a terrorist attack or a major crime to change Congress’ “very hostile” stance against backdoors. “I would be deeply disappointed if it turns out that the government is found to be exploiting a national tragedy to pursue a change in the law,” Conyers said in his opening statement on Tuesday.

The hearing showed how the debate on encryption may have shifted after the FBI decided to publicly take on Apple. It took place the day after a federal judge in New York issued a broad decision against the government in a case similar to the one in San Bernardino, strongly rebutting all of the arguments used by the government to seek access to the phones in both cases. That ruling came up frequently during the Judiciary Committee hearing, and many of the questions were based on Judge James Orenstein’s decision that giving the government the order it wanted would sanction nearly unlimited power without any congressional approval.

The government has clashed with technology companies and privacy advocates for months over encrypted devices and messages. Law enforcement officials, led by Comey, say they are unable to investigate and prosecute a growing number of crimes because suspects are using encryption to mask their messages and data. “The tools we are counting on to keep you safe are becoming less and less effective,” Comey said on Tuesday. But the law enforcement community’s demands for a way to break into encryption when necessary are vehemently opposed by privacy advocates and most of the tech sector, who say that such “backdoors” into encryption leave millions of devices vulnerable to cybercriminals and terrorists.

Despite the largely skeptical atmosphere, other lawmakers were more sympathetic to Comey’s stance. Rep. Trey Gowdy (R-S.C.) railed against colleagues who backed strong encryption, saying they supported creating “evidence-free zones” for criminals. Cedric Richmond (D-La.) also challenged the idea that encryption should trump law enforcement’s needs. “Are we in danger of creating an underground criminal sanctuary for some very disturbed people?” he asked Comey. Richmond’s district includes Baton Rouge, home to the family of Brittney Mills. Mills is a murder victim whose phone, the Baton Rouge police say, contains Mills’ detailed diary and other potentially vital information for their case. The police have  been unable to unlock the device. Comey has highlighted that case to support his argument.

Comey testified alone for about three hours before the committee. His testimony was followed by a panel including Apple’s general counsel and Manhattan District Attorney Cyrus Vance Jr., another leading advocate for law enforcement access into encryption.