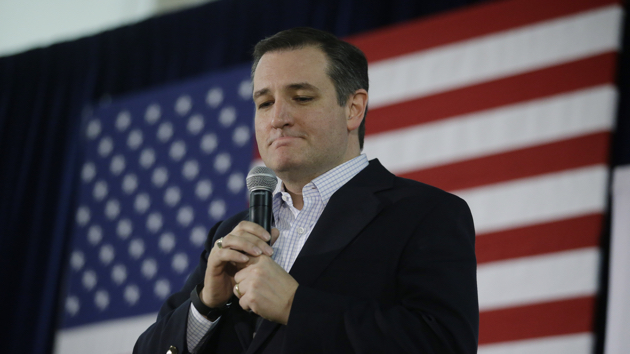 Ted Cruz spent the few days between the South Carolina and Nevada nominating contests pandering to the Cliven Bundy crowd in the Silver State, promising to give all lands owned by the federal government over to the state. When he stopped on Sunday in Henderson, a town nestled among the mountains outside Las Vegas, he spoke before a backdrop proclaiming “Return Our Land.” He ran negative ads against Donald Trump on the subject.

“Donald Trump has explicitly come out against transferring the land from the federal government back to the state of Nevada or the people of Nevada,” Cruz said in northern Nevada on Tuesday, the day of the caucuses.

Meanwhile, Trump mostly dismissed the issue. At a rally at a Last Vegas casino on Monday night, Trump called it a silly concern that Cruz was making too much hay out of. “He’s got an ad,” Trump said of Cruz, “something to do with, I want to take away your land, and I want to keep it with the federal government. I don’t even know what the hell they’re talking about. It’s a Cruz ad. It’s a Cruz scam.”

What did Cruz get for his appeal to local concerns? A third-place finish here in Nevada, 24 percentage points behind the victor, Trump.

That dynamic was flipped during the first contest of the election. While campaigning in Iowa, Cruz regularly faced questions about his opposition to the renewable fuel standards that drive the state’s ethanol industry. Iowa’s Republican governor, Terry Branstad, made it a mission to tear down Cruz for daring to question the state’s best crop. “I think it would be a big mistake for Iowa to support him,” Branstad said in January, adding that he’d like to see the Texas senator defeated to send a message to all future presidential candidates that they can’t waver from supporting the state’s economic priorities. “He’s heavily financed by Big Oil,” Branstad said. “So we think once Iowans realize that fact, they might find other things attractive, but he could be very damaging to our state.”

Trump quickly latched onto Branstad’s statements, regularly criticizing Cruz over ethanol on Iowa campaign stops and embracing Branstad’s views as though the governor had endorsed him.

Yet when the Iowa caucus results came in on February 1, Cruz outperformed the polls and sailed to a win.

In a campaign that’s broken all the rules, with Trump riding an unending series of ostensibly poisonous comments to victory after victory, here’s one more rule it seems to be breaking: the maxim that all politics is local.

Candidates like Martin O’Malley and Bobby Jindal, who tried to replicate the old-school strategy of essentially moving to Iowa and winning over voters in small town halls, fell flat when their campaigns lacked national steam. The presidential debates on the Republican side regularly drew record TV ratings last fall and set the tone for conversations in the early nominating states.

It’s not that voters in different states don’t have different concerns. The populist tinge that Trump’s message occasionally takes helped him on Tuesday in Nevada, where the economy is struggling to recover from the economic crash. But Trump’s pitch to voters has hardly changed from state to state. It’s his aggressive national stance—keep the immigrants out, keep the Muslims out, beat the bad guys abroad—that’s propelled him to the lead. Meanwhile, candidates like Cruz are learning that outright pandering to narrow issues of local concern may not be the way to win many votes in this unusual Republican primary campaign.