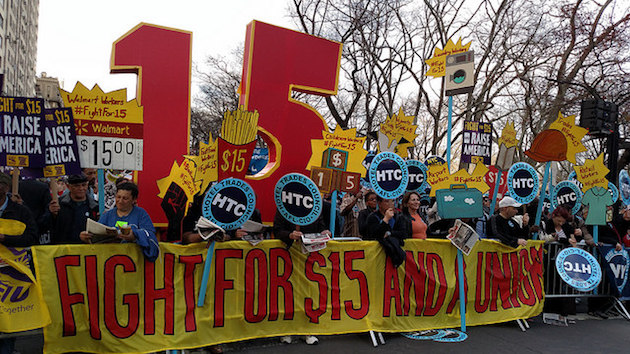 Texas isn’t known as labor-friendly territory—but that isn’t putting off Fight for $15 organizers. Building on a series of rallies across the country, a group of fast-food, home care, and other low-wage workers affiliated with the movement plan to protest outside the Republican presidential debate in Houston tonight. They are calling for $15 per hour in pay and the right to unionize.

In a race that has been inflamed by Donald Trump’s xenophobic rhetoric, some of the workers—many of them immigrants—will also call for immigration reform, the group said in a press release. The Fight for $15 has organized a string of protests around this year’s election events, including demonstrations outside debates in South Carolina and Wisconsin earlier this month. The group, which is backed by the Service Employees International Union, has gradually gained a national profile since staging its first strikes on New York fast-food chains in November 2012.

Regardless of who makes it to the Oval Office, the Fight for $15 movement has helped to propel wage hikes across the country on the state and local level. Cities such as New York and San Francisco have pledged to phase in $15 minimum wages over the next few years, and states are also beginning to take action. The Oregon House just last week passed a bill to raise its minimum wage, and New York Gov. Andrew Cuomo is traveling his state in an effort to build support for a statewide $15 minimum.

“Forty-eight percent of workers in [Texas], or some 5.4 million, are paid less than $15/hour—the second highest number in the nation—making the need to raise pay a major issue in the run-up to the primary,” Fight for $15 organizers said in their press release.