In mid-December, the entire Los Angeles Unified School District shut down for a day following a threat.Danny Moloshok/AP

On January 19, a high school in Gardiner, Maine, received a message saying there was a bomb inside the school and a shooting was imminent. That day in Millsboro, Delaware, a caller claimed to be armed and on the roof of an elementary school, threatening to injure students and staff. In Wellington, Florida, a threat of a shooting was found on a sign at Palm Beach Central high school—the third threat on Palm Beach County schools in just over a week.

That was only a portion of the dozens of threats against schools that day, including those targeting nearly 30 schools in New Jersey. Amid an atmosphere of insecurity from a bad year of mass shootings in 2015, a wave of violent threats has hit schools across the nation. A series of bomb threats disrupted Ohio schools last fall, drawing attention from the Department of Homeland Security. And in December, threats resulted in a shutdown of all 900 schools in the Los Angeles Unified School District, with the region still on edge after the San Bernardino massacre. (Similar threats to New York City schools the same day were deemed less worrisome and drew a different response.)

Threats to schools are nothing new, and the vast majority of them turn out to be benign. According to experts, there is no comprehensive national data on school threats, so there is no way to determine if the recent problems represent a rising trend. Growing awareness of them could be explained by increased media coverage, for example. We asked experts to help explain what’s going on.

Are bomb and shooting threats to schools on the rise? Kenneth Trump, the president of the National School Safety and Security Services, says that based on a limited study he did using news reports, it appears there has been a recent uptick in school threats. Last February, Trump released a study that reviewed 812 threats reported in the media from the first half of the 2014-15 school year and found that threats had risen 158 percent since the first time he conducted such a study the prior year. That said, no law enforcement agencies tally the number of school threats, and there is no mandate for schools themselves to track or report them, so there is no way to be confident about a trend one way or the other. 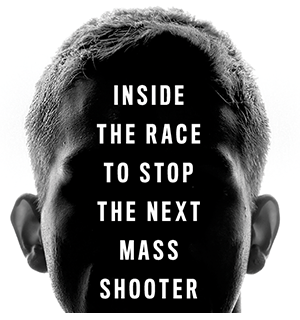 The early warning signs that could help prevent the next attack

How are the threats being made? Of the 812 threats Trump assessed, more than one-third were sent electronically, either by email or on social-media platforms. Others are phoned in. Perpetrators sometimes use internet phone systems to call in threats using anonymous numbers and computer-generated voices. This is a tactic called “swatting,” which is intended to trick law enforcement officers into responding to a perceived threat.

That turned out to be behind a disruption last week in which 30 schools in New Jersey and elsewhere received automated phone calls traced to Bakersfield, California, announcing bomb threats in “robotic-sounding voices.” The tactic originated in the online gaming community, sometimes as part of a game and sometimes as a form of retaliation. “Some people have the capability of tracking you by your IP address, getting your location, and using technology to spoof a 911 call, for example, that would actually make it appear like it was from your address,” explains Trump. Similarly, some threats are sent electronically through international proxy servers that disguise the identity of the sender. “Schools have been a major target,” he says.

How do authorities rate the seriousness of these threats? “The vast majority of threats are young people who make very poor decisions, looking at it as a prank or a hoax that won’t have serious consequences and not realizing that a ton of bricks is going to fall on them—suspension, expulsion, or felony prosecution,” says Trump.

The threats fall into two basic categories: “Transient” and “substantial” threats. Transient threats tend to be made impulsively, out of a moment of anger or perhaps even out of fear related to academic pressures, according to Scott Poland, a psychology professor and school crisis expert at Nova Southeastern University. Poland says the overwhelming majority of bomb threats are transient, according to his own and Trump’s research. “We’ve even had threats come in from high-flying students like, ‘I’m not ready for my AP history test today.'” Authorities generally regard these threats to be of little concern.

Substantial threats are when the perpetrator has a grudge, has developed plans to strike, or has access to weapons. For example, when two teens threatened to kill “as many students as possible” at South Pasadena High School in 2012, the police uncovered sufficient evidence to consider the threats credible, including that the teens had researched weapons and how to make explosive devices. But plots like these are rare.

Some threats are more difficult to gauge. For example, last Monday some 2,000 students in Tallahassee, Florida, stayed home from school or were taken out of class by their parents after four schools received threats posted to social-media accounts warning that students would be shot if they went to school. The posts were shared widely on social media and went viral, and in the following days those schools operated under heightened security as law enforcement investigated. 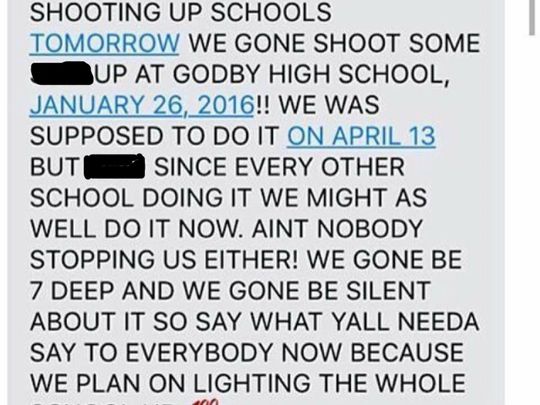 A threat against Godby High School in Tallahassee, Florida, was posted to Instagram and went viral. Tallahassee Democrat

How much danger are school kids really in? Experts caution that anecdotal evidence of a rise in threats doesn’t mean schools have become more dangerous places. The chances of any given school coming under attack are infinitesimal. “Our perception of this is just totally off,” says Poland. He surveyed his doctoral students as to whether they thought the average college or university can expect a homicide on campus every 7 years, every 30 years, or every 175 years. “They all went for every 7 years, when the reality is that it’s about every 200 years.” Schools are the safest places children go,” adds Poland, noting that when schools cancel classes without assessing the validity of a threat it may actually put students more in harm’s way.

Meanwhile, the Obama administration’s top school safety official, David Esquith, said at a recent conference that despite high-profile mass shootings, “schools are safer than they’ve ever been.”

How should schools respond? “School threat assessment teams are sorely lacking across the country, as are training and protocols associated with such teams,” says Trump. This can lead to poor policy decisions, he says. In Trump’s study, 30 percent of the schools evacuated and 10 percent closed for at least one day.

Los Angeles Unified School District said in December that it closed its 900 schools out of an abundance of caution. “It’s really pretty hard to argue with that,” notes Poland—unless you stop to think of the disruption to the lives of families. “I would argue that the several hundred thousand students would have been safest at school, with increased surveillance, than they would be on the streets.” One high school student, he notes, was struck and killed by a utility truck when the district was shut down that day.

“Administrators and police are reacting and then assessing instead of the other way around,” Poland adds. Threat assessment teams, training, and better crisis communications plans would help ease unnecessary school closings, he says. “When threats become known in the community, misinformation spreads, and school leaders have to not only manage the threat and the investigation of it, but also the communications crisis at the same time.”

One positive development, Trump says, is that schools and law enforcement agencies are increasingly coordinating to counter and resolve such threats, a practice that wasn’t so common in the past.