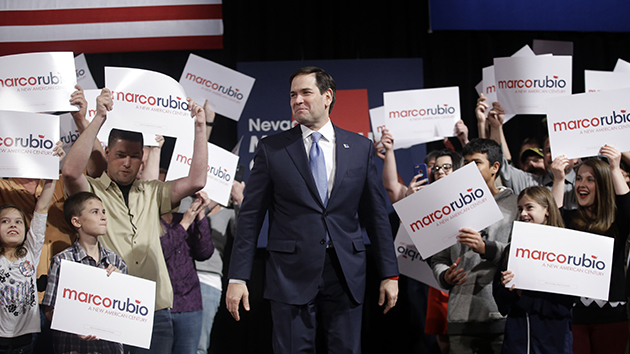 It wasn’t supposed to be like this: the day of the Nevada caucuses, and Marco Rubio fighting to come in second place. For months, his campaign had viewed Nevada as its firewall—the state that would deliver a win if the three states preceding it had failed to do so. As Mother Jones reported in January:

Nevada is an attractive state for Rubio for many reasons. He lived there for several years as a child, at a time when he practiced Mormonism, giving him a connection to the state’s large Mormon population as well as its sizable number of Hispanic voters. And unlike New Hampshire and South Carolina, Nevada is a caucus state—where conventional wisdom says a robust ground game can put the hardest-working candidate over the top.

But as Donald Trump has consolidated his lead over the Republican field, the factors that were supposed to put Rubio on top in Nevada are looking increasingly tenuous. Chief among them is the state’s Latino population. Rubio, born to Cuban parents, has sought to cast himself as the face of a changing Republican Party, one that finally begins to win over the growing Latino electorate. And Nevada, the first state of the nominating contest with a large Latino population, seemed to represent an opportunity for him to capitalize on that appeal.

But the Republicans’ weakness among Latinos, which ostensibly creates an opening for Rubio, has left a very limited electorate for Rubio to win over. In 2012, just 5 percent of Republican caucus-goers in Nevada were Latino, compared with 28 percent of the state’s overall population. Rubio’s campaign has also not played up what could be his greatest selling point among Latino voters—his work on the Senate’s comprehensive immigration reform effort in 2013—for fear of alienating the conservative base.

So now the campaign and its surrogates are downplaying expectations. “He just needs to keep finishing in the top tier, or the top three, however you want to say it,” Rep. Jason Chaffetz (R-Utah), campaigning for Rubio in Nevada on Sunday, told the Washington Post on Sunday.

Last month, the Rubio campaign laid out a “3-2-1” strategy for the early primary season: After finishing third in Iowa, Rubio would come in second in New Hampshire and then first in South Carolina. Instead, he managed just fifth and and then second in those states.

Nevada was supposed to be the safest territory for Rubio of the first four states to vote. Although polls for the Nevada caucuses are notoriously unreliable, their only consensus seems to be that Trump is leagues ahead of the rest of the field. The big question is who will come in second: Rubio or Ted Cruz.

Rubio has been organizing in Nevada for months, building a significant ground game in a state where caucus results are highly dependent on turnout. (Hillary Clinton managed to overcome Bernie Sanders’ momentum in the state on Saturday due a long-term ground operation there.) Rubio has endorsements from prominent Republicans in the state, including his Senate colleague Dean Heller, who had previously supported Jeb Bush but threw his support to Rubio once Bush left the race on Saturday night. One of the most prominent Mormons in the state, Heller could help Rubio make last-minute inroads with Nevada’s Mormon population, which plays an outsize role in the low-turnout caucuses.

Cruz has also built an impressive ground game in Nevada. He’s used the issue of federal land ownership in the state to lure rural voters away from Trump. “If you trust me with your vote, I will fight day and night to return full control of Nevada’s lands to its rightful owners, its citizens,” Cruz said in a recent TV ad. He has the endorsement of Adam Laxalt, the state’s ultra-conservative attorney general and the grandson of former US Sen. Paul Laxalt.

“I think it’s a toss-up for second,” Jon Ralston, a longtime Nevada reporter known as the dean of the state’s press corps, told Mother Jones in an email. “Then again, it’s a caucus with possibility of less than 10 percent turnout. So…”