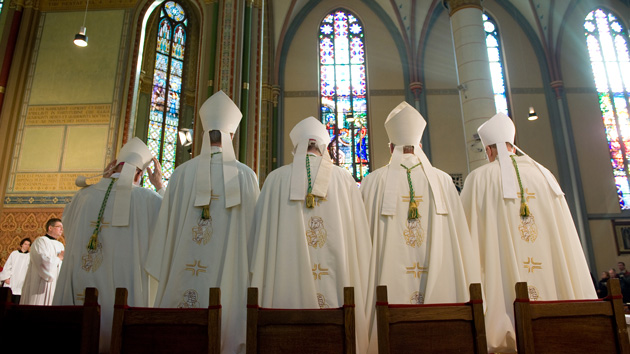 In a shocking investigation for the Guardian, Mother Jones alum Molly Redden describes a Catholic hospital in Muskegon, Michigan, in which hospital policies concerning reproductive health were guided by recommendations from the US Conference of Bishops. This resulted in a 17-month pattern whereby women who were miscarrying were refused medical intervention, resulting in dangerous cases of sepsis, emotional trauma, and unnecessary surgery.

A report that documents five cases of women whose miscarriages were treated in this manner was leaked to the Guardian. None of the pregnancies had progressed past 20 weeks, making viability outside the womb unlikely even in the best circumstances. None of the infants in these cases survived. Redden reports:

The woman inside the ambulance was miscarrying. That was clear from the foul-smelling fluid leaving her body. As the vehicle wailed toward the hospital, a doctor waiting for her arrival phoned a specialist, who was unequivocal: the baby would die. The woman might follow. Induce labor immediately.

But staff at the Mercy Health Partners hospital in Muskegon, Michigan would not induce labor for another 10 hours. Instead, they followed a set of directives written by the United States Conference of Catholic Bishops that forbid terminating a pregnancy unless the mother is in grave condition. Doctors decided they would delay until the woman showed signs of sepsis—a life-threatening response to an advanced infection—or the fetal heart stopped on its own.

In the end, it was sepsis. When the woman delivered, at 1:41 a.m., doctors had been watching her temperature climb for more than eight hours. Her infant lived for 65 minutes.

This story is just one example of how a single Catholic hospital risked the health of five different women in a span of 17 months, according to a new report leaked to the Guardian.

The report, by a former Muskegon County health official, Faith Groesbeck, accuses Mercy Health Partners of forcing five women between August 2009 and December 2010 to undergo dangerous miscarriages by giving them no other option.

Redden also revealed that all five women had symptoms that indicated immediate delivery was the safest option, but that option was never communicated to the patients. Redden delved into the complexities of the Catholic Church’s directives on reproductive health, which guided Mercy Health Partners’ interpretation that apparently prevented the hospital from providing necessary care and information to patients.

An OB-GYN reviewed the report provided by Redden and the Guardian and concluded that, given the nature of the miscarriages that were described, most physicians would “absolutely urge” inducing labor.

Here is the Guardian’s entire story. You can also find one of Redden’s Mother Jones features, “The War on Women is Over—And Women Lost,” here.