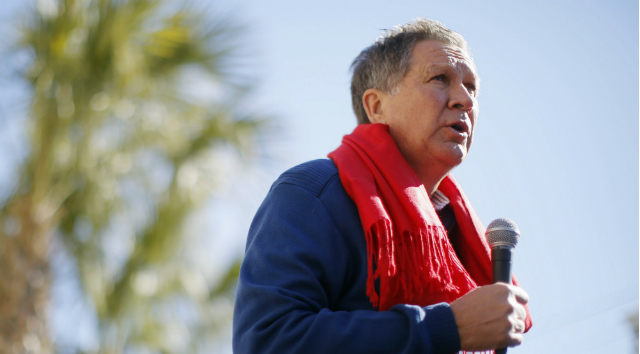 Two Wall Street titans who helped financier George Soros make his billions have channeled hundreds of thousands of dollars into John Kasich’s presidential bid. According to Federal Election Commission records, Scott Bessent, who was Soros’ chief investment officer until December, last fall donated $200,000 to New Day for America, the pro-Kasich super-PAC. In August, Stanley Druckenmiller, who was Soros’ lead fund manager from 1988 to 2000, donated $150,000 to the same super-PAC.

Given that Kasich, after retiring as a congressman in 2000, worked for seven years at Lehman Brothers, until its collapse in 2008, it’s not surprising that the Ohio governor is an attractive investment for big finance guys. But Soros is a bogeyman for conservatives, fiercely reviled by the right over the years for his deep-pocketed support of Democrats and progressive organizations. He recently emerged from something of a political slumber, donating $8 million in 2015 to two pro-Hillary Clinton super-PACs, after several years of keeping a relatively low profile as a political donor.

Druckenmiller no longer has a connection with Soros. Bessent, though, is still involved with managing Soros’ wealth. In early January, he announced he was creating a $4.5 billion hedge fund, Key Square Group, with $2 billion from Soros.

Bessent is perhaps best known for his role in a 2013 move by Soros to bet against the yen, which netted Soros’ fund about $1 billion when the Japanese currency fell. Bessent, who did not respond to a request for comment, also donated $2,700, the maximum allowed, directly to Kasich’s campaign. He has a history of contributing to candidates and PACs on both sides of the aisle. Last March, he donated to $5,400 to Democratic Rep. Sean Maloney (D-N.Y.), $1,500 to Sen. Lindsey Graham (R-S.C.), and $5,000 to Right to Rise, the pro-Jeb Bush super-PAC. In 2013, he gave $25,000 to Ready for Hillary, a pro-Clinton super-PAC. But, by far, his largest political donation has been to Kasich.

Druckenmiller has focused his political giving largely on Republicans, but he has donated to a few Democrats. Last year, prior to donating that $150,000 to the pro-Kasich super-PAC, he wrote Right To Rise a check for $103,000. He also gave $100,000 to a super-PAC backing Chris Christie, who dropped out of the presidential race this week.

Druckenmiller and Soros “broke” the Bank of England in 1992, shorting the British pound and making more than $1 billion in a single day when the currency plummeted. That windfall made Soros famous and one of the world’s richest men. Eight years later, Druckenmiller left Soros to manage his own hedge fund. He retired in 2010. He has publicly campaigned for cuts to Social Security payments, arguing that baby boomers’ retirement costs will prove disastrous for future generations.

There’s no word yet on how the donations to the Kasich presidential effort from these Soros-linked financiers will effect Glenn Beck’s theory that Soros is the puppet master behind…well, everything.