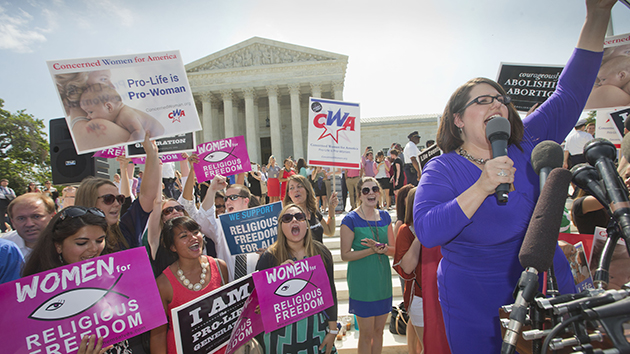 Hobby Lobby, the arts and crafts retail chain famous for going all the way to the Supreme Court to get a religious exemption from covering certain contraceptives in its insurance plans, is putting its money behind a presidential candidate who supports those same contraceptives.

The Oklahoma-based company, owned by David and Barbara Green and their children, donated $10,000 in September to Conservative Solutions PAC, which supports Marco Rubio’s presidential campaign. Rubio has called for easy access to emergency contraception, known as Plan B or the morning-after pill.

“So luckily in the 21st century, we have treatments available early on after an incident that can prevent that fertilization from happening,” Rubio told the Skimm last fall in response to a question about abortion. “And that’s why I support the morning-after pill being available over the counter and I certainly support them being made available immediately for rape victims.” Rubio took some grief for this position on anti-abortion websites.

The Green family believes the morning-after pill causes abortions (though science says otherwise), and they argued before the Supreme Court two years ago that “providing insurance coverage for items that risk killing an embryo makes them complicit in abortion.” While Hobby Lobby’s donation to Rubio may have been a business decision, the Greens have stated that they conduct their business according to their religious beliefs. “Hobby Lobby’s official statement of purpose commits the company to ‘[h]onoring the Lord in all we do by operating the company in a manner consistent with Biblical principles,'” Hobby Lobby stated in its brief to the Supreme Court in 2014. “[The] Greens allow their faith to guide business decisions.”

Though Rubio believes in access to emergency contraception, he did side with Hobby Lobby when the company fought against the Affordable Care Act’s mandate to cover all forms of contraception for its employees. Rubio signed on to an amicus brief in support of Hobby Lobby. He voted for the failed 2012 Blunt Amendment to allow all corporations to opt out of covering contraceptives based on the moral beliefs of the companies’ owners. He even introduced his own bill that was very similar to Sen. Roy Blunt’s amendment. The bill never made it to a vote on the Senate floor.

Rubio isn’t the only candidate Hobby Lobby is supporting. The company gave $10,000 in September to a super-PAC supporting Mike Huckabee, who has indicated that he supports banning emergency contraception. Over the summer, Hobby Lobby donated $20,000 to a super-PAC backing Ben Carson’s presidential bid, and David and Barbara Green each donated the maximum $2,700 to the campaigns of both Carson and Carly Fiorina. Carson, a favorite candidate among evangelical voters, briefly endorsed the use of emergency contraception in cases of rape and incest before apparently walking his endorsement back. Fiorina says she believes life begins at conception, but her position on emergency contraception, like those of most Republican candidates, is not clear.