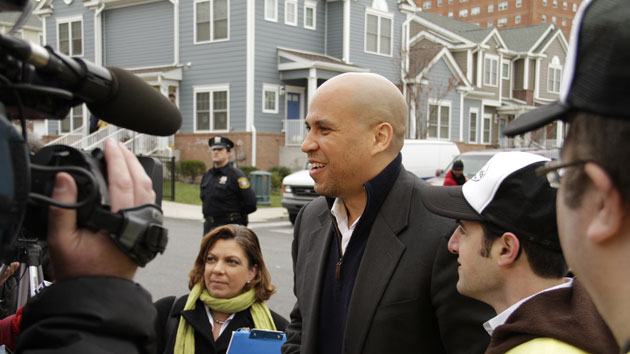 Sen. Cory Booker of New Jersey, the only black Democrat in the Senate, took a subtle jab at Democratic presidential candidate Bernie Sanders on Thursday for ignoring issues affecting African Americans in his own state of Vermont.

Campaigning for Hillary Clinton at a black church in Florence, South Carolina, on Thursday, Booker fired up the crowd with invocations of past violence against African Americas—from “gas and billy clubs” on the Edmund Pettus Bridge in Selma, Alabama, to the martyred teenager Emmett Till—while framing Clinton as the only candidate in the race voters could trust to fix the criminal justice system. “If you don’t mind all this talk in this campaign about race, I want to get real with y’all for a minute,” Booker said. His support for Clinton, he explained to the church audience, was because “she was here when it wasn’t election time. I’m here because she was supporting criminal justice reform before it was [popular] to talk about it on the campaign trail.”

In case the contrast he was trying to draw wasn’t clear, Booker got more specific. “This is not just a South Carolina issue,” he said. “I don’t care what state you come from. Heck, Vermont! People told me, ‘Cory, they don’t have black people in Vermont.’ I’m sorry to tell you this, there are 50 states; we got black people in every state! That’s true!”

He continued, “And the problems of racial disparity did not begin in this campaign. They go deep in every state. Vermont has 1 percent African Americans. But their prison population is 11 percent black! You want to speak about injustice—I see campaigns and candidates running all over this country. Don’t you come to my communities, talk about how much you care, talk your passion for criminal justice, and then I don’t hear from you after an election. And I didn’t hear from you before the election!”

Clinton has focused on winning black voters in counties where she lost big to Barack Obama (including Florence County, where Obama beat her by 42 points), emphasizing Sanders’ votes against gun control measures and her friendship with a group of African American women who lost their children to gun violence or in police custody. But her aggressive push on criminal justice is in part defensive; she’s been criticized on the left for supporting, among other things, welfare reform and the 1994 crime bill. At a fundraiser in Charleston on Wednesday night, she was confronted by a young black woman about comments she’d made as First Lady in support of the crime bill, alleging that “super-predators” were threatening urban communities. Clinton said on Thursday, “I shouldn’t have used those words.”