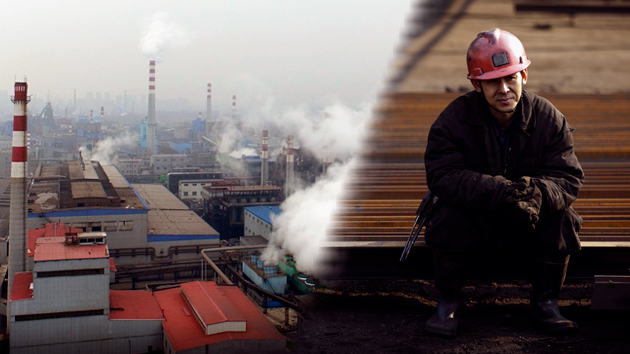 China is continuing to drag itself off coal—the dirty energy source that has made it the world’s biggest greenhouse gas emitter. Figures published Sunday night by China’s National Bureau of Statistics showed coal consumption dropping 3.7 percent in 2015, marking the second year in a row that the country has slashed coal use and greenhouse gas emissions.

To put that in perspective, Greenpeace East Asia says China’s drop in coal use over the past two years is equal to Japan’s total annual coal consumption—a trend the environmental group says could “far surpass” China’s commitments enshrined in the Paris climate deal reached in December. Last year, China’s carbon emissions dropped 1-2 percent, Greenpeace says, a decline the group attributes to both falling economic output from China’s heavy industries and an upswing in renewable energy use. China is widely expected to meet or surpass its goal of “peaking” emissions (the point at which the country begins to permanently reduce its greenhouse gas emissions) by 2030.

But the shift away from coal will also hit the country’s workers hard: The government plans to slash 1.8 million jobs in the steel and coal industries—about 15 percent of the workforce in those sectors, according to Reuters. The government says it has a $15.27 billion plan over 10 years to relocate these workers.

Today’s news follows China’s promise of a three-year moratorium on all new coal mines. The country also plans to shutter 1,000 existing coal mines this year alone, with deeper cuts to come. All of this has been accompanied by massive investments in wind and solar that have made the country’s renewable energy firms world-leaders in clean power.

But with China—the world’s second largest economy—there is always a disclaimer. It’s right to be skeptical of official economic and energy statistics coming from China, which some experts say can be subject to political pressure.

Still, there are some undeniable signs of progress. The last major coal-fired power station in Beijing is expected to close this year, welcome news to residents of a city that is frequently blanketed in toxic smog.