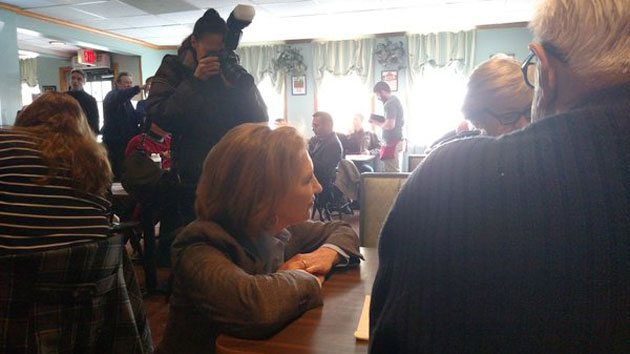 I just wanted some poutine. But when I showed up at Manchester’s Chez Vachon, I had company. As a waitress explained to a curious diner, “It’s Carly Fiorini!”

For the second day in a row, Fiorina, the former Hewlett-Packard CEO, crashed a diner:

This woman does not GAF about Carly Fiorina in Manchester. She wants to eat her breakfast. (via @UnionLeader) pic.twitter.com/rTmmaZNbzV

She isn’t the first candidate to stop by Chez Vachon looking for a few votes and some good photos. So many candidates have stopped by the iconic French-Canadian establishment that it’s made life complicated for the people who work there. Donald Trump was there on Sunday. Bill and Hillary Clinton stopped in for breakfast on Monday.

Trump’s visit was a “zoo,” Jenna Desmarais, the manager, told me.

“They were nice and everything—they just had a really big entourage, really big,” she said. “We didn’t have any notice and so all of a sudden there’s people coming in the back door of the kitchen, there were people over here, state police shut down the road, they were trying to pat down our customers. It was really uncomfortable—like I had to tell them they couldn’t do that, that’s not okay.”

It made it nearly impossible for everyone else to have breakfast. “I eventually had to find somebody and say, ‘Listen I understand you guys are doing your job, but I gotta do mine,’ and we couldn’t even move. Couldn’t even move! So they did. He’s like, ‘Let them get their pictures and kick everybody out.'”

The Clintons’ visit was a lower-key affair, and in Desmarais’ view, they were friendlier (although Trump did tip 50 percent). “They were very relaxed because they’ve been here before,” Desmarais sadi. “She’s like, ‘I’m definitely eating.'” (They both had veggie omelets; Hillary got a side of sausage. In case you were wondering.) “They seemed more interested in actual people than in just shaking hands.”

So far, the only major candidate who hasn’t stopped by Chez Vachon this election cycle is her favorite. “I’m actually a fan of Bernie,” she said. But she’s never met him. “He’s the only one who hasn’t been there!”