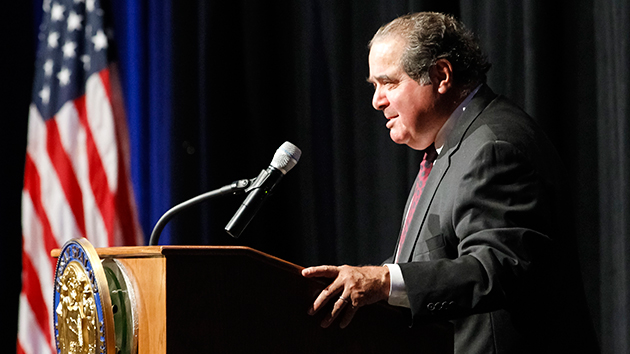 Supreme Court Justice Antonin Scalia was found dead at a ranch outside Marfa, Texas, on Saturday morning, according to multiple news reports. The Associated Press reported on Saturday afternoon that Scalia’s death has been confirmed by the US Marshall’s Service. He was 79 years old.

In extending his condolences, Supreme Court Chief Justice John Roberts honored Scalia as “an extraordinary individual and jurist, admired and treasured by his colleagues.” Roberts said Scalia’s “passing is a great loss to the Court and the country he so loyally served.”

Texas Gov. Greg Abbott was among the nation’s first elected officials to react to the news of Scalia’s death, issuing a statement that was reposted to Twitter:

According to an ABC affiliate, KVIA, Scalia died in his sleep after a day hunting quail. Early reports said Scalia had been a guest at the Cibolo Creek Ranch, south of Marfa.

GOP presidential hopefuls Donald Trump and Ted Cruz—both preparing to square off in a televised debate tonight in Greenville, South Carolina—were quick to express shock at Scalia’s death, praising his conservative voting record. Cruz described Scalia as “one of the greatest Justices in history”:

Today our Nation mourns the loss of one of the greatest Justices in history – Justice Antonin Scalia https://t.co/8ESSQHU1VY

The totally unexpected loss of Supreme Court Justice Antonin Scalia is a massive setback for the Conservative movement and our COUNTRY!

Jeb Bush described Scalia as his “favorite justice” whose “logic and wit were unparalleled,” and whose decisions “were models of clarity and good sense.” 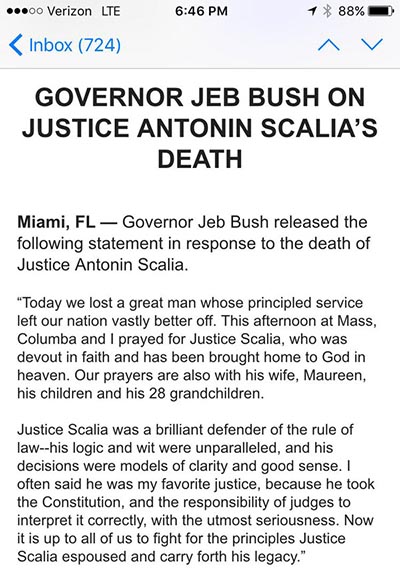 John Kasich also expressed his condolences, calling Scalia’s death “a serious loss to our nation and the Court.” 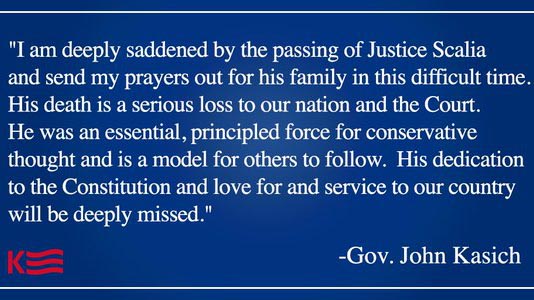 Soon after the announcement that Scalia had died, prominent conservatives also began demanding that no new justice be confirmed until after Obama’s presidency ends next year.

Bernie Sanders, the Vermont senator and Democratic contender for the White House, also praised the justice as “colorful” and “brilliant”:

According to the Associated Press, the US Marshall’s Service said Scalia was discovered to have passed away after he failed to appear for breakfast on Saturday morning, but few other details have emerged so far confirming the exact circumstances surrounding his death. According to CNN reporter Evan Pérez, the justice had not been feeling well:

Justice Scalia told friends he was with he didn’t feel well and went to bed last night. He didn’t get up for bkfast. Was found unresponsive.

This is a breaking news post, and we will be updating it with new information as it becomes available.