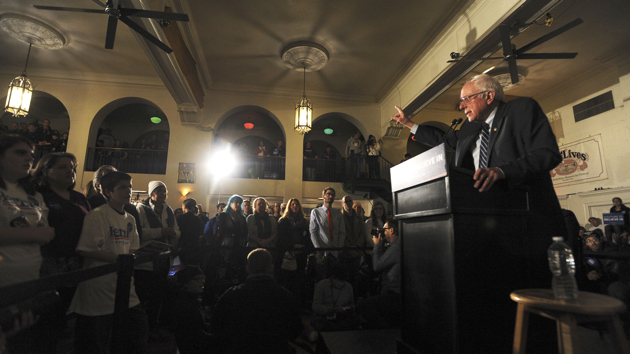 For a presidential candidate aiming to come away with a big upset in Monday’s Iowa caucuses, Bernie Sanders closed out his final night before the the first votes are cast by wholeheartedly embracing his small-ball approach to campaigning. His final Iowa rally, to a crowd of 1,700 at Grand View University in Des Moines on Sunday, was introduced by a string of not-quite-A-list actors and musicians: Connor Paolo (Serena’s obnoxious younger brother on Gossip Girl), Josh Hutcherson (Peeta in The Hunger Games), and Foster the People.

The crowd played along, but didn’t really perk up until Sanders himself showed up. The senator from Vermont rolled through a 50-minute stump speech tackling the full range of his usual points—Walmart should pay a fair wage, health care should be run by the government, banks should have to pay for free public colleges—but took a little time early in his spiel to boast about how much less money he raised from big outside donors than his opponent, Hillary Clinton.

“My opponent yesterday announced that she had received some $45 million for her super-PAC,” Sanders said. “We announced that we zero dollars for our super-PAC.” (He didn’t mention the money that unions have spent on his campaign.) He continued, “We announced that we have received throughout this campaign—and this is so unbelievable, never in a million years would I have thought it possible—that we have received up to now 3.2 million individual contributions. That is more contributions than any candidate up to this point of a campaign in the history of the United States of America.”

Small ball does often win big games. Monday will reveal whether it’s sufficient to give Sanders the first big win of the race to the Democratic nomination.

Correction: An earlier version of this article mistakenly said that actor Richmond Arquette spoke at the rally.