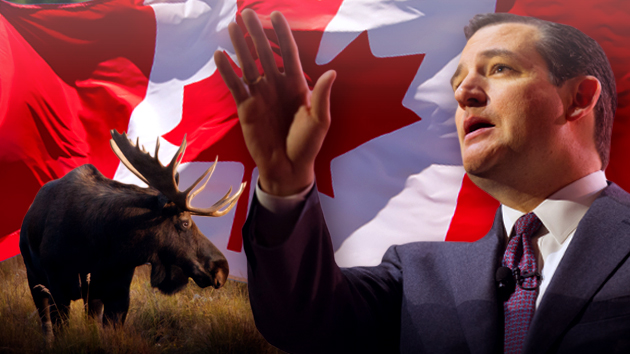 During the memorable clash between Donald Trump and Ted Cruz at last night’s Republican presidential debate, the real estate mogul explained why he has persistently raised questions about his Canadian-born rival’s eligibility to serve as president.

“If for some reason…he beats the rest of the field, I already know the Democrats are going to be bringing a suit,” Trump said. “You have a big lawsuit over your head while you’re running. And if you become the nominee, who the hell knows if you can even serve in office?”

As it turns out, Trump’s concerns over a lawsuit weren’t unwarranted. In fact, one was filed that same day by Houston lawyer Newton Boris Schwartz Sr. The suit asks a federal judge to define the “(1) status (2) qualifications and (3) eligibility or ineligibility of defendant for election to the office of the President and vice President of the United States.” In the poorly written, 28-page complaint, Schwartz noted that this question is “now ripe for decision,” and then invoked the so-called birther arguments used against President Barack Obama (see the full complaint below):

If all that was and is required for Defendant’s eligibility for the election to the office of the President and Vice President of the United States is that one of his biological parents be a U.S. citizen at the time of his birth in Canada outside the 50 United States…then why have the “birthers” or “doubters” and questioners of the place of birth of the 44th President of the United States, Barack Hussein Obama have persisted to this date and prior to his 2008 elections in 2008 and 2012? When undisputedly: (1) he was born in the U.S. state of Hawaii after its admission on August 21, 1959 and is documented by his birth records…”

It’s unclear what will come of this complaint, but this isn’t the only birther action that Cruz is contending with. Also on Thursday, the Arizona Republic reported that Rep. Kelly Townsend, a Republican state legislator from the Phoenix suburb of Mesa, is “circulating a measure at the Arizona legislature that would call a U.S. constitutional convention to outline what it means to be a natural-born citizen.” The paper notes that Townsend hopes to get her Legislature on board before reaching out to other states, since, after all, “it will take 34 states to convene such a meeting, something that hasn’t happened since 1787.”

This legislative effort—like the lawsuit—appears quixotic. But Trump has ensured this question of his natural-born citizenship status will dog him. As seen in last night’s debate, Trump’s questioning of Cruz’s eligibility has marked a turning point in relations between the two candidates, who have previously refrained from attacking each other throughout the campaign. But, as Trump told CNN’s Dana Bash after Thursday’s debate, “I guess the bromance is over.”