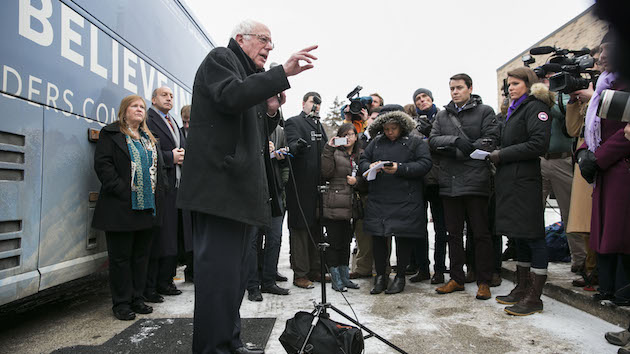 Bernie Sanders takes questions from the press after a union speech in Des Moines on Tuesday.Congressional Quarterly/Newscom/ZUMA

Sen. Bernie Sanders is sick of the media’s attempts to get him to attack Hillary Clinton. “I’m not going to be engaged in personal attacks on Secretary Clinton, or anybody else,” he said after repeated questioning from reporters outside an event Tuesday morning in Des Moines. But whatever distaste he has for going negative doesn’t seem to be enough to keep him from getting in a few digs at his leading Democratic opponent in the caucuses that will take place here in Iowa in less than a week.

Sanders—who has steadily crept up to a statistical tie with Clinton in Iowa polling averages—spoke before a local chapter of the United Steelworkers, where his typical lines on boosting unionization through a card-check program, fighting against trade deals, and taxing the rich were rapturously received. After the event, his staff gathered reporters outside the campaign bus for a quick question-and-answer session. Before letting anyone pose a question, Sanders launched into a diatribe about what he saw as two of the main contrasts between Clinton and himself that he thought would appeal to the union crowd.

The first was Social Security, which Sanders said “doesn’t get the kind of attention, in my view, that it deserves.” He wants to impose payroll taxes on incomes greater than $250,000 a year—which are currently exempt—and use that revenue to pay for better Social Security benefits. “You do that, we expand benefits by $1,300 a year for people making less than $16,000 on Social Security,” he said. “That is my view. To the best of my knowledge, that is not Secretary Clinton’s view. And I would hope that she would join me in standing up with the millions of seniors and disabled veterans who are struggling on inadequate Social Security benefits.”

The second was international trade. Clinton has said she opposes the Trans-Pacific Partnership during the course of the Democratic competition, but Sanders doesn’t think her opposition is sincere. “My record on trade is very, very different than Secretary Clinton’s,” he said. “I am glad that after talking about how good the TPP would be, finally under great pressure she decided to oppose it. But I think it is a real area of disagreement.”

Once Sanders opened the session up to questions, he wasn’t happy with the queries he received from the press gaggle. First up was Fox News’ Brett Baier, who turned the conversation to the conservative TV network’s favorite topic: Clinton’s private email server. “Clearly you have momentum before the caucuses,” Baier began. “Your message is resonating. I’m wondering, with the backdrop of the email investigation with the FBI, if now you regret that from the beginning you didn’t—”

“No,” Sanders quickly interjected. “No, absolutely no regrets at all. In fact, I would argue that the reason that we’re doing well is that people understand that we are trying to run a different kind of campaign. Not one of personal attacks—one of dealing with the real issues facing the American people.”

When the next reporter also tried to coax Sanders into addressing the email situation, he had enough. “Again, that’s the same question,” Sanders said, clearly losing his patience. “I’ve got to tell you this: With all due respect, and I mean this, it’s not what the American people want to hear.”