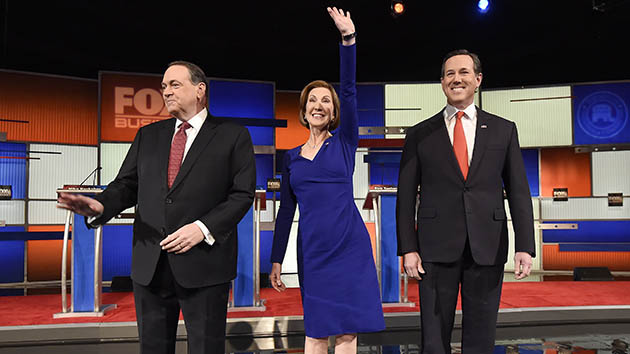 The lowest-polling GOP presidential candidates—Gov. Mike Huckabee, former Pennsylvania Sen. Rick Santorum, and former Hewlett-Packard CEO Carly Fiorina—squared off prior to the main GOP debate Thursday night, trying to answer a very basic question: why are they still in the race? Kentucky Sen. Rand Paul was also invited to the undercard debate, but declined to participate if he wasn’t given a spot at the main event. Paul announced that he would instead host a “tele-town hall” on Facebook.

Ahead of Thursday’s debate, the three remaining undercard debaters were polling at about 4.5 percent combined (Santorum was polling at zero), according the RealClearPolitics polling average.

Fiorina came out of the gate with a sharp dig at Hillary Clinton:

Wow. Carly Fiorina in her opening statement: “Unlike another woman in this race, I actually love spending time with my husband.”

The candidate’s responses to question on major issues were more or less predictable: On the economy? Obama has ruined it and pushed jobs overseas. On foreign policy? Obama can’t handle ISIS but they can. Along the way, they managed to sneak in a few zingers.

Fiorina, for instance, took a shot at GOP frontrunner Donald Trump: “Despite Donald Trump’s bromance with Vladimir Putin, Russia is our adversary.”

In one of the event’s most memorable exchanges, Santorum offered an interesting spin on mass deportations. He described sending the children of undocumented immigrants back to their countries of origin as “gift” that would enable them to improve their home countries. He called this “exporting America” in what can only be described as perhaps the worst study abroad program ever. At another point, Santorum suggested people Google him to see how he once stood up to Hillary Clinton. But you probably want to avoid Googling “Santorum.”

Huckabee kept to his normal tack of decrying Obama’s policies on all fronts, including repeating the mostly false claim that, under the Obama administration, the US navy has shrunk to its lowest level since 1915.

Overall the event seemed flat, and certainly could have used the lovable flourishes of erstwhile GOP candidate Sen. Lindsey Graham.