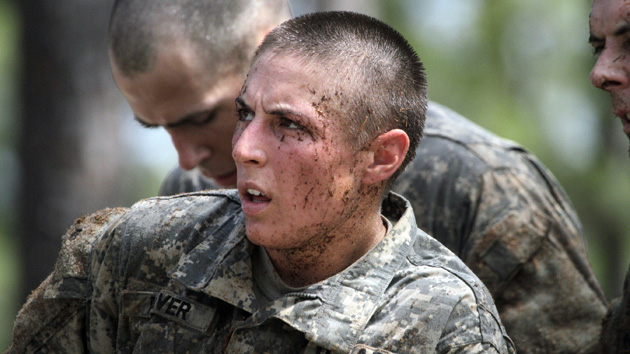 At 5′ 1” and 110 pounds, Janiece Marquez was among the Army’s smallest recruits when she signed up for the service a decade ago. The 19-year-old from New Mexico was determined to fight in combat anyway, but she quickly learned women were banned from the front lines. “I said I wanted to be in the infantry,” Marquez recalls. “All the men in the room laughed.”

“It’s a slap in the face telling us that chicks can do our jobs,” one officer wrote.

Today’s prospective female fighters might hear a different response. Last month, Defense Secretary Ash Carter announced that the military would open all combat jobs—from the infantry to special-operations forces—to women. This month, branches of the military are required to submit their plans to the Defense Department for the gender integration of combat units. That’s good news for people like Marquez, and for those who have been denied job promotions because they lacked combat experience.

But not everyone views Carter’s proclamation as a welcome reform. In an interview with CNN on January 4, Maj. General Robert Dees, the campaign chair for Republican presidential candidate Ben Carson, said he didn’t think it was a good idea: “If you look at the population demographics, most women…cannot properly carry a 230-pound soldier—with a rucksack and combat vest on—off of the battlefield to save his life. So there are just certain realities where men can do certain things better, women can do certain things better.” Carson, also present at the interview, followed up by saying that if he were elected president, he’d be willing to consider rolling back programs allowing women to fight in combat if advised to do so.

Carson’s campaign chair isn’t the only one with reservations. Eighty-five percent of men surveyed from US Special Operations Command said they opposed allowing women into their specialties, according to a report published recently by the Pentagon. “It’s a slap in the face telling us that chicks can do our jobs,” one soldier wrote.

But what do “the chicks” say? We asked former and current female officers to respond to some of the concerns that cropped up in the Pentagon report:

Concern: Women aren’t strong enough. Soldiers must pass certain physical standards before landing in combat positions. “I know there are women who can do this, but they are few and far between compared to men. I’m not being an a–hole about it; just a realist,” wrote a staff sergeant in the Marines.

Outside of combat positions, some military standards, including the scores on mandatory physical fitness tests, are scaled differently depending on gender and age. But Secretary Carter has made it clear that standards for combat positions will not be lowered—women will have to pass the same tests as men to earn their spots.

Female officers agree it’s crucial to have the same standards for men and women, for safety and to earn respect. “Those who are capable are going to rise to the challenge,” Chief Warrant Officer Raquel Patrick of the Army, previously deployed in Afghanistan, told the Washington-based Women in International Security in an interview. Though “we know from research that fewer women can meet some of the elite standards like [Army] Ranger School, there are still some that can make it,” adds Megan MacKenzie, author of Beyond the Band of Brothers: The US Military and the Myth That Women Can’t Fight. “It’s a question of whether you exclude an entire gender based on averages.” Maia Goodell, a lawyer and former surface warfare officer in the Navy, notes that it’s important to consider what “different physical abilities or kinds of bodies might be good at.” Female mechanics in aircraft, for example, can squeeze into smaller spaces.

Concern: They can’t handle the mental strain of combat. “Women are very protective,” a sergeant in the Army’s Special Forces wrote. “They nurture kids. Will a woman return fire and kill a child insurgent fighter?”

But female officers have already proven they’re mentally tough enough for war. Though they’ve been blocked from ground combat jobs for decades, some women have found themselves in the line of fire for years in the Middle East, where the distinction between front lines and rear support is murky. Army Captain Meredith Mathis, who offered cultural support to the US military in Afghanistan, told Women in International Security that she has “seen as much, if not more, combat than a lot of infantry soldiers—leading patrols, going on foot patrols, IEDs, getting mortared.” What’s more, Marquez, who sometimes worked as a gunner while deployed in Afghanistan, says women in combat jobs might have an advantage: On the cultural-support team she worked on, she says, women secured valuable intelligence speaking with Afghan women who wouldn’t talk with men. “Had we not gone in and tapped into the 50 percent of the population that had previously been ignored, we wouldn’t have access to this information,” she says.

Concern: Periods and PMS will get in the way. “I cannot stand my wife for about a week out of the month,” a petty officer in the Navy wrote. “I like that I can come to work and not have to deal with that.”

Yet men’s bodies are equally unpredictable, says MacKenzie. “If we are going to talk about women’s PMS, we should talk about men’s boners too,” she wrote in a tongue-in-cheek response to media coverage of the special-ops survey, citing “reflex erections” that happen when men get scared or stressed: “a definite combat liability—particularly with younger male troops.” In all seriousness, she tells Mother Jones, “Men have hormones; women have hormones. But the idea that women in Iraq are sitting with their feet up eating M&M’s every 28 days is ridiculous.”

“The idea that women in Iraq are sitting with their feet up eating M&M’s every 28 days is ridiculous.”

Former and current female officers point out that it’s possible to suppress menstruation with hormonal contraceptives, and that there are even funnels designed to allow women to urinate standing up. Ultimately, women are professionals who can handle the rough conditions of deployment like anyone else. “When I deployed, we had no showers for over 30 days and we were in full MOPP gear, sweating and being disgusting just like everyone else,” Meghan Malloy, a sergeant first class in the Army, told Women in International Security.*

Concern: “If she gets pregnant, she’ll leave the team.” That’s according to one Special Forces sergeant first class in the survey.

But MacKenzie cites studies showing that time lost to the military for pregnancy is small compared with time lost for men’s disciplinary issues and addictions. In 1991, for example, the Navy Personnel Research and Development Center found that the average pregnant women in the Navy lost one day per month of work; in an earlier study, cited in Linda Bird Francke’s Ground Zero: The Gender Wars in the Military, the Navy found that men lost almost twice as many days to drug and alcohol rehabilitation as women lost to pregnancy. “Any sort of physical ailment could prevent someone from deployment. Pregnancy may be one, but singling it out because it’s the one thing that can’t happen to a man is not fair,” Marquez adds. The Navy last year tripled the length of its maternity leave, and the Army and Air Force are expected to follow suit, but Marquez notes that, particularly at the level of elite combat units, female soldiers aren’t likely to abuse this benefit. “Women who make the choice to serve in a combat role are not the type of women to malinger and get pregnant just to avoid a deployment,” she says.

Concern: Integrating women will degrade cohesion and morale: “Men act different around females,” a petty officer in the Navy SEALs wrote. “It’s not just being able to do the job, but [being] part of the group, the brotherhood. I don’t think it can work.” Others surveyed worried about whether women might need separate facilities. “At Ft. Bliss, three women shared their own barracks. Men were stacked,” wrote a sergeant first class in the Special Forces. “It breeds dissension.”

Female officers deployed as part of cultural-support teams have been stationed with all-male special-ops teams in Afghanistan. In interviews with Women in International Security, many said they shared toilet and shower facilities with the men; some shared mud huts or tents for sleeping, while others slept in separate tents or semi-permanent buildings. Some of the women described “old-school” male officers who refused to speak with them, but usually, they said, cohesion wasn’t a problem. “They basically just treated me like any other member of the team. They didn’t pick on me because I was female, but they also didn’t go out of the way to baby me,” said Captain Annie Kleimen of the Air Force Reserve.

MacKenzie, who has also studied the militaries in Canada, Australia, and Europe, says male and female officers in Norway share sleeping quarters and bathroom facilities without problems—one study showed the integration boosted team morale. “The idea that special-forces men can act professionally but can’t share a toilet with a woman is sort of absurd,” she says.

Captain Mathis asked her male colleagues in Afghanistan how her presence affected the team. “They definitely said the dynamics changed…but it’s not necessarily a bad thing,” she recalled. “Sometimes you get tired of the bro club.” Patrick, the chief warrant officer from the Army, assured her male colleagues in Afghanistan that they didn’t need to walk on eggshells around her. “As long as no one was being disrespectful, as a professional I had no problems,” she said.

“We never ask women if they want to work with men. They don’t have a choice.”

And it’s possible a change in culture could help the military address its sexual-assault problem. Though the number of women who qualify for elite combat positions will likely be small in the beginning, giving them a chance to be there is necessary, says Goodell. “Without that recognition, while women are in the second-class citizen status, and while there aren’t women around all the time, women are going to be more vulnerable to attacks,” she says.

The Rand National Defense Research Institute, which conducted the survey of male special-ops personnel, acknowledged in its report for the Pentagon that “all of the challenges we identified,” from questions of physical preparedness to team cohesion, “have come up previously”—such as when women were first integrated into military service academies in the 1970s. “None of them proved insurmountable,” the report said.

MacKenzie points to the repeal of Don’t Ask, Don’t Tell: Many concerns about gay men openly serving in the military turned out to be nonissues once implementation began, she says. She warns not to give too much weight to the concerns of male soldiers who have not worked closely with women. “We never ask women if they want to work with men,” she says. “They don’t have a choice.”

Correction: The original version of this article misidentified the speaker of this quote.