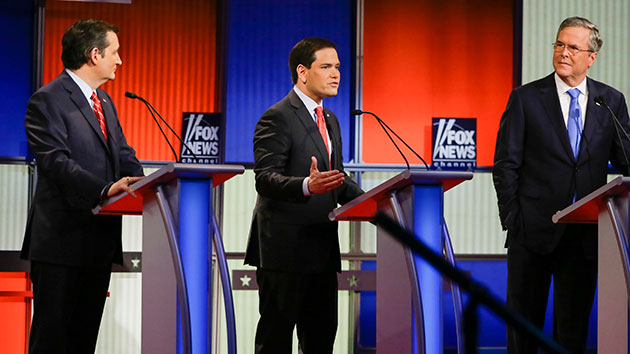 On Thursday night, the seventh Republican presidential debate, hosted by Fox News, took place in Des Moines, Iowa, just days before the first votes for the party nomination are cast in the Iowa caucuses on Monday—and the center of attention was the candidate who wasn’t on stage.

The “elephant not in the room,” as host Megyn Kelly put it, was Donald Trump, the GOP front-runner. He announced on Tuesday that he would boycott the debate due to a dislike for Fox News’ questioning style, in particular Kelly’s, with whom Trump has clashed since she asked him about his insults to women in an August debate. Trump threw a separate event at Drake University at the same time as the debate, which he billed as a fundraiser for “wounded warriors.” (Mother Jones was denied entry.)

Still, the show went on, with Sen. Ted Cruz of Texas, who is polling in second place in Iowa, taking Trump’s customary spot at the center lectern. Here are a few highlights from the debate, which included a generous helping of digs at Trump:

Cruz impersonates Trump: Cruz opened the debate by thanking Iowans for their hospitality and promising to visit frequently should he be elected. Then he channeled his inner (satirical) Trump. “Now, secondly, let me say I’m a maniac and everyone on this stage is stupid, fat, and ugly,” he said. “And Ben, you’re a terrible surgeon. Now that we’ve gotten the Donald Trump portion out of the way…”

Chris Wallace vs. Ted Cruz: After Wallace asked New Jersey Gov. Chris Christie a question that mentioned Cruz’s vote to curtail the National Security Agency’s surveillance program, Cruz tried to interject, asking to respond to Wallace’s question as well. Wallace wouldn’t allow it and the two scuffled about the debate rules on stage. “I know you like to argue about the rules, but we’re going to conduct a debate,” Wallace said.

Rubio gets hit hard for his inconsistent immigration stance: Kelly and Sen. Marco Rubio of Florida got into a heated exchange about his record of supporting “blanket amnesty” for undocumented immigrants. Kelly showed a video clip of Rubio on the campaign trail vehemently opposing amnesty as an immigration solution. She pointed out that he’d previously co-sponsored a bill to help give amnesty to immigrants. “Haven’t you already proven that you can’t be trusted on this issue?” she asked. Rubio replied that he does not support amnesty and that he has never reversed himself on the issue. Jeb Bush piled on. “I’m kind of confused because he was the sponsor of the Gang of Eight bill that did require a bunch of thresholds but ultimately allowed for citizenship over an extended period of time,” Bush said of Rubio. “I mean, that’s a fact.”

Rubio turns the flip-flopping allegations on Cruz: Piling onto the immigration discussion, Kelly turned to Cruz, asking him about his own divergent statements on citizenship and legalization for undocumented immigrants. In his response, Cruz used a dig at Rubio to affirm his opposition to a path to citizenship for immigrants. Cruz emphasized that while Rubio “chose to stand with Barack Obama” in support of the Senate’s 2013 effort at immigration reform, Cruz played a key role in killing the bill entirely. A visibly displeased Rubio responded sharply.

“This is the lie that Ted’s campaign is built on,” Rubio said. “The truth is, Ted, throughout this campaign, you’ve been willing to say or do anything in order to get votes.” Rubio listed several instances of Cruz’s supporting immigration reform, notably in helping design George W. Bush’s immigration policy. “Now you want to trump Trump on immigration,” Rubio said. “But you can’t—we’re not going to beat Hillary Clinton with someone who’s willing to say or do anything to win an election.”

The easy target: Planned Parenthood: When host Bret Baier shifted the discussion to federal spending, he turned to Christie. “You talk a lot about entitlement reform and you say that that’s where the federal government can get savings needed to balance the budget,” Baier said. “But can you name even one thing that the federal government does now that it should not do at all?”

Christie smirked. “How about one that I’ve done in New Jersey for the last six years?” he replied. “That’s get rid of Planned Parenthood funding from the United States of America.” The crowd erupted with applause. Baier pushed Christie to think beyond Planned Parenthood. (The women’s health provider gets about $500 million in federal funding annually, a drop in the bucket of the $3.5 trillion federal budget.) “Anything bigger?” Baier asked. Christie continued to hammer away at Planned Parenthood. “Bigger than that?” he said. “Let me tell you something, when you see thousands upon thousands upon thousands of children being murdered in the womb, I can’t think of anything better than that.”