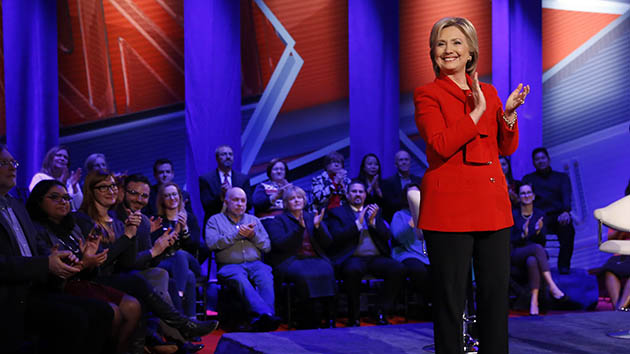 With seven days remaining before the Iowa caucuses, the three Democratic presidential candidates gathered in Des Moines for a “town hall” forum hosted by Drake University and the Iowa Democratic Party. The town hall format isn’t a debate. The candidates were never on stage at the same time; instead, they responded to questions asked by voters and CNN moderator Chris Cuomo. The event offered Vermont Sen. Bernie Sanders the opportunity to persuade voters that he was electable, former Maryland Gov. Martin O’Malley the chance to explain why he was not irrelevant, and former Secretary of State Hillary Clinton the occasion to demonstrate that her experience makes her the obvious choice to be president.

The event took place as Clinton’s lead over Sanders in Iowa narrowed, and Sanders remained ahead in the polls in New Hampshire, where the first primary will be held a week after the Iowa caucuses. In the past week, Clinton picked up endorsements from the Des Moines Register, the Boston Globe, and the Concord Monitor in New Hampshire. But as Sanders’ poll numbers surge, Clinton has become increasingly negative, pointing to Sanders’ record on guns, his alleged un-electability, his support of single-payer health care, and the fact that he’s a self-proclaimed socialist. Sanders has responded with his own negative attacks, focusing on Clinton’s cozy relationship with Wall Street and her resistance to campaign finance reform. But at the town hall, the candidates were less confrontational as they attempted to engage directly with Iowa voters.

Here are some of the highlights:

CNN’s Chris Cuomo pressed Sanders on how he planned to pay for free college education and universal health care.

“The criticism is to pay for this, what you’re really asking for is one of the biggest tax hikes in history,” Cuomo said.

“But Chris, that is an unfair criticism,” Sanders replied.

“But just to be clear,” Cuomo continued, “you are going to raise taxes to do this?”

Then Sanders said something that politicians usually avoid: “Yes. We will raise taxes, yes we will. But also let us be clear, Chris, because there’s a little bit of disingenuity out there. We may raise taxes, but we are also going to eliminate private health insurance premiums for individuals and for businesses.” Here’s his whole statement.

After having interviewed Sanders’ brother, Cuomo asked the Vermont senator to describe his athletic prowess—his Brooklyn basketball team apparently won a citywide championship—and to say what his parents would have thought of his candidacy. Watch Sanders’ emotional response as he talks about his father.

Sanders was asked to watch and respond to one of Clinton’s ads, which portrayed her as the most experienced presidential hopeful and more prepared to lead the country. Sanders said he respects Clinton but questions her judgment, citing her vote in authorizing war in Iraq (which he opposed) and her pandering to Wall Street. He drew a contrast between her experience and his good judgment.

Sanders got a chance to make a 30-second pitch to Iowa voters, explaining why they should support him, and, not surprisingly, he stated his familiar talking points on economic inequality, campaign finance reform, and returning power to the people. He concluded, “That great government belongs to us, not just to a few.” Here are the rest of his remarks:

Martin O’Malley responds to questions on his controversial record on policing while mayor of Baltimore.

O’Malley has trailed throughout the campaign, but during the town hall he attempted to take advantage of having the stage all to himself for half an hour. So far during the presidential contest, he has not had to say much about his controversial record on policing issues when he was mayor of Baltimore. But the first question from audience Monday night, asked by Iowa State University student Joi Latson, forced O’Malley to answer for his zero-tolerance crime enforcement policy. “How were you planning to ensure racial equality,” she asked, “when your history in office contradicts your current platform to fight structural racism.” Here’s how he responded:

O’Malley uses a climate change question to highlight the fact that he is a lot younger than his two rivals.

It’s no secret that 74-year-old Sanders and 68-year-old Clinton are much older than 53-year-old O’Malley. So when asked about climate change, O’Malley seized on that generational divide as a key difference between him and his opponents in their approaches to addressing climate change.

O’Malley’s closing argument: Iowa voters can turn an underdog into a winner.

O’Malley was given 30 seconds to make the case as to why his poor showing in the polls should not discourage Iowa voters from supporting him. O’Malley said, “Iowa has found a way to sort through the noise and sort through the national polls and to lift up a new leader for our country at times when that was critical and essential.”

Hillary Clinton deftly handles a direct question about the enthusiasm gap and her perceived dishonesty among young voters.

Clinton has been dogged with a so-called “enthusiasm gap” among younger voters, and Taylor Gipple asked her directly to respond to the problem.

“It feels like there’s a lot of young people like myself who are very passionate supporters of Bernie Sanders, and I just don’t see the same enthusiasm from younger people for you,” he asked. “In fact, I’ve heard from quite a few people my age that they think you’re dishonest. But I’d like to hear from you on why you feel the enthusiasm isn’t there.”

“Well I think it really depends upon who you’re seeing and talking to,” Clinton said, adding that she sees young people working for her all the time. Nonetheless, she praised young people for being involved, no matter whom they are supporting, and stressed the importance of their participation in November. As for being perceived as dishonest, that’s just politics, she said: “People have thrown all sorts of stuff at me, and I’m still standing.”

Clinton cites her foreign policy chops, despite her vote in support of the war in Iraq.

Sanders repeatedly criticized Clinton for voting in 2002 to permit the US invasion of Iraq. After answering a question about foreign policy by saying that diplomacy is always her first approach, Clinton acknowledged once again she had made an error: “First of all, I have a much longer history than one vote, which I’ve said was a mistake because of the way that that was done and how the Bush administration handled it.”

Clinton says she’d give her Republican opponents in Congress “bear hugs” once she’s president and find a way to work together.

Clinton knows she’s had political enemies for decades, and on Monday night she talked about how political campaigns can bring out the worst in people. But, she said, when she’s president, she’ll do her best to work with everyone. She would even give Republicans in Congress “bear hugs.” Watch here:

Clinton takes a strong stand against the anti-Muslim rhetoric of Donald Trump.

A Muslim woman, Erum Tariq-Munir, whom CNN identified as a US Air Force veteran, asked Clinton how she could make sure the United States was the best place to raise her family. Clinton thanked her for her service and took a strong stand against the anti-Muslim rhetoric expressed by Trump and others in the Republican primary.

Asked which previous president has inspired her most, Clinton chooses not to name Barack Obama or her husband.

“Sorry, President Obama; sorry, Bill,” she said, “Abraham Lincoln.” In what served as her closing statement, Clinton cited Lincoln’s presidency as she made her case that she is the most prepared candidate and the one most able to bring people together, work with political enemies, and focus on several issues at once.