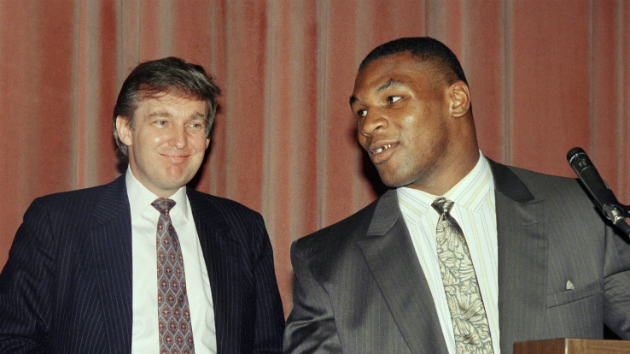 In October, GOP front-runner Donald Trump got a surprise endorsement from infamous boxer Mike Tyson. “He should be president of the United States,” Tyson told the Huffington Post. “Hell yeah, big time!” Tyson said he liked Trump’s business instincts: “The guy is winning fair and square, he’s not bribing anybody.”

Trump and Tyson are old friends who did business together in the late 1980s, when the real estate mogul promoted and hosted several of Tyson’s fights at his Atlantic City casinos and even fashioned himself for a time as the boxer’s “business adviser.”  And in a largely forgotten episode, Trump came to the boxer’s aid during one the darkest moments of Tyson’s career—his 1992 conviction for raping a beauty queen. To save the champ from being locked up, Trump pitched a highly controversial proposal that would have essentially allowed Tyson to buy his way out of prison. To some observers, it looked like Trump was engaging in a form of bribery—or at least attempting to rig the system.

Over the years, Tyson’s bouts had been highly lucrative for Trump’s casinos, which paid millions to host the fights but reaped millions more in revenues from the surge in gambling that resulted during these highly anticipated events. In 1991, Tyson seemed destined for one of the biggest fights of his career, a face-off with then-heavyweight champion Evander Holyfield. As the groundwork was laid for this epic bout, it seemed like Trump might lose this event to his competitors in Las Vegas.

Then Tyson was arrested and convicted of raping 18-year-old Desiree Washington in Indianapolis.

Suddenly, not only did Holyfield want to bow out of the fight, but Tyson faced the prospect of up to 60 years in prison. But Trump had an idea for saving Tyson and the Tyson-Holyfield match. On February 13, 1992—the day Tyson’s sentencing was postponed for later in the month—Trump told a Newsday reporter that he thought a deal should be struck that would allow Tyson to serve no prison time, retain his boxing license, and fight Holyfield. In exchange for Tyson’s freedom, he proposed that a cut of the fight’s proceeds go to Desiree Washington and perhaps another share could go to victims of “rape and abuse” in Indiana. Trump told Newsday:

As everybody knows, I am very strong on the death penalty and for the strongest of sanctions and hardest of disciplines for anyone. But far more people can be helped by allowing the tremendous sums of money from his fights to be put into funds used for rape victims.

Trump expounded on his proposal at a press conference the following day, as reported by the Associated Press:

Now you could always say, ‘Well, then, rich people are going to be able to buy themselves (out of trouble). That’s not necessarily true. This is a case that’s unique…The case could be made, well, you shouldn’t be allowed to buy yourself out, as perhaps the prosecutor would say…But a lot more people can benefit by what I’m suggesting than by throwing a man in jail, virtually with no money—because by the time this ends he won’t have any money—by throwing a man in jail, virtually penniless.

Instead, you let him go out, he would have made between $15 million and $30 million in his next fight: tremendous amount of money, tremendous amount of good (it) can be doing…Millions and millions of dollars could pour in to help people that were truly hurt, that won’t have anything and that will live penniless without it. And I think a lot people, a lot of people, can be helped if this is properly handled.

Of course, Trump was far from a disinterested party. He stood to make millions if he bagged the proposed Tyson-Holyfield fight—which was expected to be the highest-grossing fight ever. At the press conference, though, Trump suggested he wasn’t pushing this deal for his own benefit: “I wouldn’t care if the fights were in my place or where the fights would be. We’ve had most of Mike Tyson’s fights. We’ve never had any trouble with Mike Tyson. We’ve never had a thing like this happen.”

Trump also expressed disbelief that Tyson could have committed the crime: “I don’t know, after knowing Mike, I don’t know how it did happen. But it was a jury. It was a jury verdict. And Mike Tyson will have to live with the jury verdict.”

At that point, the press conference took a weird turn. Trump was asked, “If your sister was raped by a millionaire, would you encourage her to accept a big bundle of cash to forget everything?” He replied, “I think every individual situation is different.” Trump then said he couldn’t guarantee that Tyson wouldn’t rape anybody else if he were allowed to avoid prison.

Trump’s proposal was not well received. Holyfield’s promoter called the plan “absolutely reprehensible.” The prosecutor in the Tyson case, J. Gregory Garrison, was even more scathing. “These people seem to think they can buy their way out of anything,” he told Newsday. “Well, I’ve never seen anyone buy his way out of jail in this state yet.” Sports columnists and legal experts around the country pointed out that Trump would be able to continue his lucrative relationship with Tyson if the boxer avoided jail.

Trump’s campaign spokeswoman did not respond to a request for comment about this episode. A Tyson representative said the now-retired boxer was too busy to talk about it.

Tyson was ultimately sentenced to six years in prison, but he only served three, returning to boxing and eventually fighting Holyfield in 1996. It was the most lucrative boxing match ever (until the 2007 Mayweather-De La Hoya fight), but it was not hosted at a Trump casino. Even so, Trump found a way to come out on top, telling reporters that he had placed a $1 million dollar bet on Holyfield, even though the odds against him were 20-1. Tyson lost, and the payout, Trump claimed, was $20 million. “I’m friends with both Evander and Mike,” Trump said at the time. “I made the million-dollar bet even though I thought Holyfield would actually lose. “You just don’t put 20-1 odds against a champion. I have to admit that I was surprised when Holyfield won. I bet the odds.”

There was just one problem. Las Vegas bookmakers at the time said they were aware of no such Trump bet.