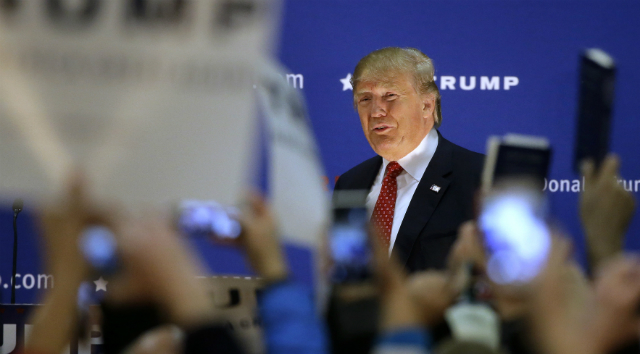 Donald Trump is just getting started. At an overcrowded rally Monday night in Nashua, New Hampshire, that left hundreds of fans stranded outside in the cold—along with a Mother Jones reporter who was denied entry—Trump announced he would soon begin spending millions of dollars to win the early primaries, a shift for a campaign that has so far achieved great success in the polls while spending hardly any money on ads.

The rally was a clear message to the conservative establishment that has long predicted, or at least hoped, that the billionaire’s quixotic run for the Republican presidential nomination would finally begin to falter. In recent days, Trump’s campaign has faced a slew of new attacks from rivals and questions from the media about his viability. Jeb Bush’s campaign has been running regular anti-Trump ads in the Granite State, featuring Bush sternly scolding Trump at the most recent GOP debate, while Trump makes exaggerated and silly faces. Last week, a New York Times article questioned how many Trump supporters would actually vote. Hours before Trump arrived in New Hampshire, Joe McQuaid, the publisher of the conservative New Hampshire Union-Leader (where I used to work), published a front-page editorial calling Trump an insult to the intelligence of New Hampshire voters and comparing the real estate tycoon to Biff, the buffoonish villain in Back to the Future.

None of that seemed to faze Trump, or his supporters. An hour before Trump was set to take the stage at a middle school in Nashua, the school’s gym was already at capacity, which one campaign security staffer said was between 1,400 and 1,600 people. Even at that point, an estimated 800 more hopefuls stood in the freezing cold in a line that snaked around the building, and more Trump fans continued to trickle in from surrounding neighborhoods, where the streets were lined with cars that had quickly overfilled the school’s lots.

The scene was chaotic. A large man, who identified himself as a Trump fan tired of seeing people cut the line, stationed himself near the doors, shooing away anyone trying to wander in without waiting. A string of vendors did brisk business in Trump paraphernalia, but neither the self-appointed line watchdog nor the vendors said they had seen or spoken to any actual Trump campaign staff.

In the media area, volunteers ushered in members of the press, but entrance was not necessarily any easier. Campaign staff requested that I wait while Trump’s spokeswoman, Hope Hicks, was asked whether I could join other reporters in the media area. A few moments later, a campaign staffer summoned a Nashua police officer over, pointed at me, and said, “He’s got to go.”

It’s not the first time the Trump campaign has denied entry to professional journalists. (An unaffiliated blogger was also ejected from last night’s rally, but other noncredentialed media were seen entering.) In November, the campaign refused to allow a BuzzFeed reporter to come into an Iowa rally, and it denied media credentials to reporters from the Des Moines Register and Univision. Hicks did not respond to an email about why Mother Jones was denied entry.

The bouncing of reporters fit in with the event’s theme, which was heavily focused on Trump’s disdain for the media. In response to the Union-Leader editorial, Trump spent 10 minutes disparaging the publisher as a “lowlife” and mocking the newspaper’s appearance and endorsement of Chris Christie for the GOP presidential nomination. Trump called the newspaper a “pile of garbage.”

But the biggest news of the night came when Trump said he would vastly increase his spending on television commercials. To date, Trump appears to have spent only $217,000 on advertising—compared with $41 million spent by Bush and his allied super-PAC. But Trump told the crowd that’s about to change.

“Starting around January 4, we’re spending a lot of money!” Trump said, claiming the campaign would spend about $2 million a week on ads. “We just don’t want to take any chances. We’re too close.”

Trump reiterated that pledge Tuesday morning in a tweet: